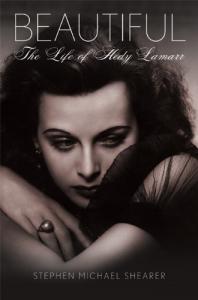 Description de l'ouvrage :
The Surprising Story of Hedy Lamarr, “The Most Beautiful Girl in the World”

As a teenage actress in 1920s Austria, performing on the stage and in film in light comedies and musicals, Hedy Kiesler, with her exotic beauty, was heralded across Europe by her mentor, Max Reinhardt. However, it was her nude scene, and surprising dramatic ability, in Ecstasy that made her a star. Ecstasy's notoriety followed her for the rest of her life. She married one of Austria's most successful and wealthy munitions barons, giving up her career for what seemed at first a fairy-tale existence. Instead, as war clouds loomed in the mid-1930s, Hedy discovered that she was trapped in a loveless marriage to a controlling, ruthless man who befriended Mussolini, sold armaments to Hitler, yet hid his own Jewish heritage to become an “honorary Aryan.”

She fled her husband and escaped to Hollywood, where M-G-M changed her name to Hedy Lamarr and she became one of film's most glamorous stars. She worked with such renowned directors as King Vidor, Victor Fleming, and Cecil B. DeMille, and appeared opposite such respected actors as Clark Gable, Spencer Tracy, John Garfield, and James Stewart. But as her career waned, her personal problems and legal wranglings cast lingering shadows over her former image. It wasn't until decades later that the world was stunned to learn of her unexpected role as the inventor of a technology that has become an essential part of everything from military weaponry to cell phones—proof that Hedy Lamarr was far more than merely Delilah to Victor Mature's Samson. She demonstrated a creativity and an intelligence she had always possessed. Stephen Michael Shearer's in-depth and meticulously researched biography, written with the cooperation of Hedy's children, intimate friends, and colleagues, separates the truths from the rumors, the facts from the fables, about Hedy Lamarr, to reveal the life and character of one of classic Hollywood's most beautiful and remarkable women.

Revue de Presse :
From Publishers Weekly : In this authoritative biography, Shearer (Patricia Neal: An Unquiet Life) surveys the career of actress Hedy Lamarr (1913-2000), born Hedwig Eva Maria Kiesler in Vienna. In her teens, she was cast in German films, and in 1933, after she appeared nude in Ecstasy, she was catapulted to international fame. During an Atlantic crossing on the Normandie, Louis B. Mayer offered her an MGM contract and changed her name to Hedy Lamarr. Promoted as "the most beautiful girl in the world," she appeared in more than two dozen films between 1938 and 1958. Metro denied her a loan out to do the lead in Casablanca, but her vibrant screen presence in Cecil B. DeMille's Samson and Delilah (1949) left a lasting impression on both filmgoers and Paramount; it raked in over million to become the most profitable Paramount production up until that time. She faded from films in the 1950s, made numerous 1960s TV appearances and then dropped from the limelight, retiring to Florida in 1987. Providing probing and detailed coverage of her five marriages, children, various lawsuits, radio roles and shoplifting headlines, Shearer has combined extensive archival research with insightful interview quotes. The result is a fascinating biography that recreates Hollywood's Golden Age of Glamour. Copyright © Reed Business Information, a division of Reed Elsevier Inc. All rights reserved.

Revue de Presse :
From Booklist : *Starred Review* Shearer's biography does not simply chronicle the life of Hollywood legend Hedy Lamarr, from her cosseted childhood in an assimilated Jewish family in Austria to her early breaks in Max Reinhardt's internationally famous theater company; her scandalous, career-launching nude scene in the Czech film Ecstasy; her tortured first marriage to Jewish Nazi arms manufacturer Friedrich Mandl (dubbed an “honorary Aryan” by the Third Reich); and her daring escape from the sadistic Mandl and Nazi Germany to Los Angeles and MGM. The real beauty of the book is how well and how wholeheartedly Shearer tells this remarkable story. It helps that much of Lamarr's life reads like a novel, packed with surprise twists and stereotype-destroying details, such as Lamarr's fascinating after-hours research in military communications systems (done with avant-garde composer George Antheil), research that formed the foundation for the technology used in Wi-Fi and cell phones. For this she won an award in 1997, three years before her death, from the Electronic Frontier Foundation. One finishes the book feeling that one has read a complete portrait of Hedy Lamarr, actor and inventor, a biography that reveals, with drama and wit, how much more there was to this complex, brilliant woman than her ethereal natural beauty. --Jack Helbig

The Most Beautiful Woman in Film

The Life and Breakthrough Inventions of Hedy Lamarr

My Life As a Woman