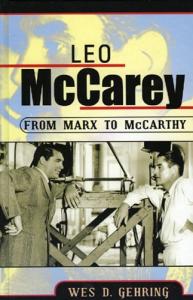 Description de l'ouvrage :
Early in his Hollywood career, Leo McCarey honed his skills by working with some of the great names of comedy, including Laurel and Hardy, W.C. Fields, and The Marx Brothers, whose 1933 classic, Duck Soup, McCarey directed. Later, as a writer and/or director, McCarey was responsible for a number of classic films, including Ruggles of Red Gap, The Awful Truth, Love Affair, Make Way for Tomorrow, My Favorite Wife, and An Affair to Remember. McCarey's 1944 film Going My Way was nominated for ten Academy Awards and won seven, including the first triple crown awarded to the same person for writing, producing, and directing. Its sequel, The Bells of St. Mary's, would receive eight nominations, including Best Picture and Director. Despite all of his commercial and artistic successes, McCarey has been sadly neglected by film historians and scholars. While many of his contemporaries have been elevated to auteur status, McCarey's contributions to film have not sparked the same level of interest or esteem. Film scholar Wes Gehring seeks to rectify this with Leo McCarey: From Marx to McCarthy, the first full-length biography of this underappreciated artist. By exploring the director's life as filtered through his art, Gehring maintains that McCarey's films were often a reworking of his antiheroic self. In addition, the apparent diversity of his films actually represents an interrelated web of various comedy genres and a pattern of antiheroic characters and themes. The author makes the convincing case that throughout his life and career, McCarey was driven to entertain any audience, from a single person to movie millions, always trying to tell a better story. McCarey's own, long overdue story is finally revealed in this biography about one of the most fascinating figures to ever come out of the Hollywood dream factory.

Biographie de l'auteur :
Wes D. Gehring is a professor of film at Ball State University and an Associate Media Editor of USA Today Magazine, for which he also writes the column "Reel World." He is the author of twenty film-related books, including two previous volumes for Scarecrow Press, Romantic vs. Screwball Comedy (2002), and Irene Dunne, First Lady of Hollywood (2003).

Revue de Presse :
Leo McCarey directed Laurel and Hardy in their first team efforts, Carey Grant and Irene Dunne in the Awful Truth, and Bing Crosby in Bells of St. Mary's, to cite just a few examples from a film career spanning 1920 to 1963. Gehring (film, Ball State U.) profiles his life and career, often offering critical reaction to McCarey's oeuvre, which spanned the gamut from the subversively screwball Marx Brothers' film Duck Soup to the anti-communist My Son John. (Reference and Research Book News) ...[Gehring] opens up the cultural landscape with fascinating links to Thurber, Benchley, Hemingway, and the McCarthy era in this wonderfully readable story. Recommended. All collections; all levels. (CHOICE) A fascinating career clearly, and long overdue for the detailed treatment offered by author Wes D. Gehring in Leo McCarey: From Marx to McCarthy...McCarey is unquestionably a pantheon director, and his contributons to cinema and popular culture are vast; Gehring's book is highly recommended, and is especially enlightening regarding the director's early work at Roach with Charley Chase. (The National Board Of Review)