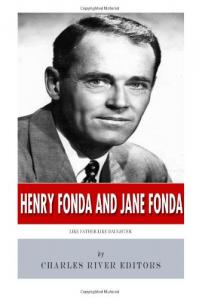 Description de l'ouvrage :
*Includes pictures. *Includes their own quotes about their lives and careers. *Includes a bibliography for further reading.
Among all of Hollywood's iconic leading men, arguably none proved as versatile at acting as Henry Fonda, whose career spanned six decades and earned him Academy Awards for roles in various genres. After breaking into Hollywood in 1935, Fonda quickly rose the ranks, earning an Academy Award nomination in the classic Twelve Angry Men (1940), but Fonda had the kind of staying power that most actors could only dream of. In fact, Fonda had already received an honorary lifetime achievement award from the Academy (in 1980) before winning the Oscar for Best Actor for his role in On Golden Pond (1981), an award he earned when he was already well into his 70s and only about a year away from his death. Fonda would also earn Emmy nominations for his work on two different shows and even a Grammy for a spoken word album in 1977. And as if all that wasn't enough, he was also a critically acclaimed stage performer, winning a Tony for Mister Roberts in 1948.
One of the remarkable aspects of Henry Fonda's career is that he was able to play vastly different roles despite not changing his style of acting. As Henry's distant personality would suggest, he hailed from an old-school breed of actors who didn't express emotions outwardly, and even as his progeny would become associated with Method Acting, Henry remained in the same mold as actors like Cary Grant and Jimmy Stewart. Of course, the seemingly effortless nature of Henry's acting only made him more endearing to contemporary audiences, even as his acting style would eventually go out of style.
Growing up in the shadow of one of America's most famous actors would be intimidating for anyone, but few have emerged out of that shadow like Jane Fonda, the oldest daughter of screen legend Henry Fonda. In fact, when Jane co-starred with her father in the last film he made, On Golden Pond, he won the Academy Award for Best Actor for it. However, she has accomplished more than enough in her own career to make her father proud, winning 2 Academy Awards, an Emmy and 7 Golden Globe Awards herself. Jane burst onto the scene in the early 1960s, when she was still in her 20s, and when she performed in Sunday in New York, one critic labeled her "the loveliest and most gifted of all our new young actresses". She has been acting at least off and on from that point forward, earning critical acclaim both for her acting skills and for many of the movies she appeared in.
However, today many people associate Jane Fonda with political causes, most notoriously her stance against the Vietnam War. Indeed, she might still be the face of the anti-Vietnam movement because of an episode that earned her the notorious nickname “Hanoi Jane”. In addition to speaking out against the war, Fonda actually traveled to Hanoi in July 1972 and was photographed sitting in a North Vietnamese anti-aircraft battery, immediately earning widespread condemnation that sought to brand her as anti-American. Fonda has spent the rest of her life trying to explain her regret over it, telling Barbara Walters in a 1988 interview, “I would like to say something, not just to Vietnam veterans in New England, but to men who were in Vietnam, who I hurt, or whose pain I caused to deepen because of things that I said or did. I was trying to help end the killing and the war, but there were times when I was thoughtless and careless about it and I'm very sorry that I hurt them…I will go to my grave regretting the photograph of me in an anti-aircraft gun, which looks like I was trying to shoot at American planes.” Nevertheless, it has not tempered her liberal political activism.