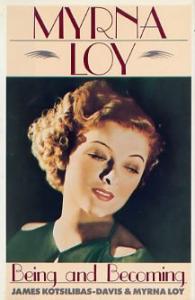 Description de l'ouvrage :
Myrna Loy's ravishingly witty portrayal of Nora Charles in The Thin Man movies of the 30s and 40s elevated her to near-icon status as the wife every man wanted and every woman wanted to be: she created one of the most loved and timelessly entertaining characters in film history and became, herself, one of the most popular Hollywood actresses of her time. A poll of twenty million fans crowned her Queen of the Movies. Now, with candor and warmth, this most private of stars takes us from the Montana of her girlhood to her beginnings in the Hollywood of the 20s, and beyond. We follow her from silents to sound as her career is catapulted, in 1934, into high orbit by the first of six Thin Man movies she made with William Powell ... she perceptively profiles Rudolph Valentino, who discovered her, and the other legends with whom she worked, played, and formed lasting friendships.

With the onset of WW II she develops the activist in herself while working for the Red Cross and carrying on a long-distance mutual infatuation with FDR. Over the years she would support the UN, fight Joseph McCarthy, and serve on civil rights commissions. She participates in presidential campaigns and works with Truman, Dean Acheson, and Eleanor Roosevelt -- and shares with us her astute perceptions of them all. We see her career enter a new phase, as she moves to more mature roles with unusual grace and success; and she gamely tries television and theater at a time of life when most performers would be content to rest on their laurels.

Interspersed with Loy's lively and revealing narrative are the words of friends from her childhood and youth as well as reminiscences by colleagues such as William Powell ("The smartest thing I ever did was to marry Myrna Loy on the screen"), Cary Grant, and many others.

What emerges from this book -- a personal account as direct as it is entertaining -- is the portrait of a talented, spirited, indomitable woman: in other words, the real Myrna Loy.

Revue de Presse :
From Publishers Weekly : Kotsilibas-Davis (The Barrymores, etc.) and others contribute here to the story of a remarkable woman, but it's told mainly in her own words. Of pioneer ancestry, all-American Myrna Williams was born in 1905 on a Montana farm. As a young dancer, she was cast in "native" vamp roles in films and named Loy to suit the image. It was in the Thin Man series of the 1930s that the actress's quicksilver wit made her the ideal Nora to the late William Powell's Nick Charles. Loy continued to shine in memorable films with Cary Grant, Spencer Tracy, Gable et al., all of whom she recalls fondly here, as she does her women friends. There are spirited defenses, for instance, of Jean Harlow and Joan Crawford with critical views of the latter's daughter Christina, author of Mommie Dearest. Loy became a political activist during World War II and has kept working for human rights, primarily on UNICEF and UNESCO committees. The reader discovers a great deal in this story of a person who seems to have learned early on what Matthew Arnold too observed: "Life is . . . a being and a becoming." Photos not seen by PW. Copyright 1987 Reed Business Information, Inc.

From Library Journal :
For most of Loy's long Hollywood career she was known as "the perfect wife." On the basis of this memoir, it would seem that she was also pretty nearly "the perfect human being" as well. The narrative emphasizes her political activism working for the United Nations and for several Democratic presidential candidates, but Loy also recalls her early days in Montana, social and working life in Hollywood, and her later stage work. Interspersed throughout are remembrances by friends and co-workers, none of whom have anything but praise for Loy. Some readers may find themselves wishing the authors had been less tasteful and genteel. John Smothers, Monmouth Cty . Lib., Manalapan, N.J.Copyright 1987 Reed Business Information, Inc.

The Only Good Girl in Hollywood