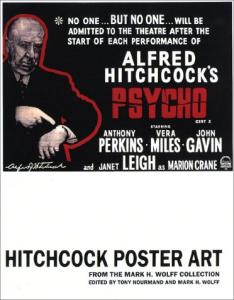 Description de l'ouvrage :
Alfred Hitchcock's style was unmistakable, and his films more than ever are revered the world over. Any list of the greatest films of all time is sure to include titles like Psycho, Dial M for Murder, Vertigo, and North by Northwest. In this lavishly produced book, Wolff and Nourmand have collected all the best promotional art--including posters, lobby cards, and other promotional materials--of Hitchcock's entire career, including material so rare that the copy photographed for this book is the only one known to have survived. Among the treasures displayed: an American poster for Woman to Woman, the 1923 film for which Hitchcock wrote the screenplay and served as assistant director and art director; a poster for the first film he directed, The Pleasure Garden of 1925; and material from classic films like Strangers on a Train and To Catch a Thief. Hitchcock Poster Art provides a fascinating look at the international scope of the master's influence and appeal.

Présentation Amazon :
The 100th anniversary of Alfred Hitchcock's birth brought about numerous retrospectives of his career, but Hitchcock Poster Art is perhaps the most fitting tribute for such a master of visual images. This stunning compilation contains posters for each of Hitchcock's films--even one from an early silent for which Hitchcock served as screenwriter and assistant director. The collection is incredibly thorough, including posters from foreign releases, lobby cards, and cover art from movie tie-in novels. The art itself is splashy and gorgeous, but this title is far more than eye candy. What a delight to track the evolution of film posters themselves over Hitchcock's 50-plus-year career, and to witness the stylistic differences between countries--the posters from Poland are disturbingly stark, especially in contrast to the colorful work from Japan. Another fascinating visual progression is how Hitchcock's image was used as his career unfolded, whether looming over the characters in Marnie or slyly inserting an L into Strang[l]ers on a Train. Hitchcock fans and movie lovers of all stripes will relish this celebration of a true film genius. --Ali Davis

From Library Journal :
The centenary of Alfred Hitchcock's birth continues to inspire new books about the enigmatic genius. Hitchcock Poster Art is a visual feast of movie posters and lobby cards, some previously unseen, spanning the director's career. The reproductions, from Hitchcock specialist Wolff's collection, represent all 39 films and include posters from over ten countries as well as a few book and magazine covers. Posters from Diabolique and other films influenced by the director are also represented. This fascinating look at movie promotion from the 1930s through the 1960s is indispensable for film collections and an affordable purchase for public libraries, too. Film historian Mogg's The Alfred Hitchcock Story is less biography than filmography. Similar in format to Robert Harris's The Films of Alfred Hitchcock (1976), it examines individual films, providing a brief synopsis and examining Hitchcock's technique and direction, from the early silent films through the 1970s. Essays by Dan Auiler (Hitchcock's Notebooks, LJ 3/1/99) and other contributors are interspersed. Tantalizing illustrations and quick summary boxes with alternate titles, first screening date, producer, country, and duration mark each film. Although Mogg doesn't break new ground, his book is a worthwhile addition to popular collections.AKelli N. Perkins, Herrick P.L., Holland, MI Copyright 1999 Reed Business Information, Inc.

Film Art from the Underground