« The Ethical Vision of Clint Eastwood » 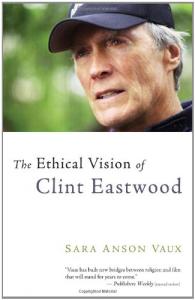 Description de l'ouvrage :
Clint Eastwood is a Hollywood icon, with five Academy Awards, five Golden Globes, and numerous other accolades for his work as an actor, director, producer, and composer. Yet because he rose to fame in "spaghetti westerns" and Dirty Harry shoot-em-ups, few critics have ventured to explore Eastwood's philosophical, ethical, and artistic agenda as an intellectual filmmaker.

Addressing this void, film scholar Sara Anson Vaux analyzes fifteen of Eastwood's best-known films from narrative, artistic, and thematic perspectives. She traces the nuanced development of Eastwood's unfolding moral vision over a forty-year continuum, showing how this vision has grown more sophisticated even as many of the motifs expressing it -- justice, confession, war and peace, the gathering, the search for a perfect world -- have remained the same.

Christopher Deacy
-- author of Theology and Film: Challenging the Sacred/Secular Divide
"A beautifully written, challenging, erudite -- while also deeply personal and moving -- engagement with Eastwood and his films. The precision of Vaux's writing is matched by the wisdom and the penetrating theological eye that she brings to this study. . . . I liked this book enormously. It bridges the popular and academic terrain, and together with all of her learned musings presents a deeply contemplative and compassionate insight into how Eastwood's films have changed her."

Rose Pacatte, FSP
-- award-winning film journalist and author
"This lavish and articulate hymn of praise to one of Hollywood's greatest film directors lets us experience Clint Eastwood's films anew through the dual lens of ethics and transcendence."

Robert K. Johnston
-- author of Reel Spirituality
"Long an American icon, Clint Eastwood, the filmmaker, has brought to his distinctive storytelling style an increasing empathy for the outcast, the loser, the immigrant. At once engaging and perceptive, comprehensive yet personal, Vaux's unpacking of Eastwood's commitment to the intrinsic worth of every person is masterful. It is hard to imagine a better reflection on Eastwood's movies."Booklist
"Clint Eastwood is a film actor and director of international distinction. Vaux is not only one of his many fans but also an insightful commentator on his work. . . . This book will push many back to the films for another look."

Biographie de l'auteur :
Sara Anson Vaux is director of the Office of Fellowships at Northwestern University, where she also teaches film in the religious studies department. Her other books include Finding Meaning at the Movies.