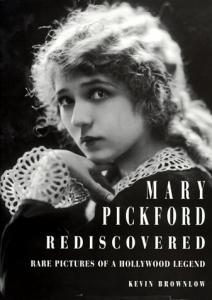 Description de l'ouvrage :
In the days of silent cinema, Mary Pickford was unmatched in popularity. Known as "America's Sweetheart," she lived a fairy-tale life appropriate to such status--marrying Douglas Fairbanks at the height of both their careers and living in the legendary mansion called Pickfair (which she maintained until her death in 1979). The world's first superstar was best known for playing children, which her youthful appearance and acting abilities allowed her to do well into her 30s. She was also, however, an amazingly versatile performer as well as a shrewd businesswoman and film producer. Pickford was a founder of the Academy of Motion Picture Arts and Sciences--she's credited with having conceived of the institution--and she cofounded United Artists with Charlie Chaplin, D.W. Griffith, and Douglas Fairbanks.

Today, it's a precious treat to view one of Pickford's movies, since silent cinema is rarely revived in the theaters and her films have only recently begun to circulate on video. But fans and film historians hungry for Pickford's talent will devour the hundreds of magnificent (and mostly never-before-published) photographs and production stills collected in this stunning tribute to the Hollywood legend. This lush book features 232 black-and-white photos and stills--many taken by some of the century's most talented still photographers and cinematographers.

Robert Cushman's detailed introduction discusses the Academy of Motion Picture Arts and Sciences' arduous process of collecting the photographs, many of which were for decades believed lost. The main text, which limns Pickford's career and traces the photographs and films in chronological order, was composed by Kevin Brownlow, author, documentary filmmaker, and restorer of silent movies. Brownlow incorporates interviews with Pickford and her former colleagues, period accounts, anecdotes, and technical information about the process of creating a silent film. This gorgeous, fascinating title brings silent movies alive--even for those people who may never have seen one--and, most importantly, pays well-deserved homage to a woman without whose influence the film institution could well have taken a different course.

Revue de Presse :
The first comprehensive study of silent film star Mary Pickford, this lush photographic tribute is a testament not only to Pickford's monumental career but also to film curators and preservationists who, in efforts such as this, renew appreciation for their subjects. According to the authors, historian and filmmaker Brownlow and Cushman, the photograph curator at the Academy of Motion Picture Arts and Sciences (AMPAS), Pickford's legacy is ripe for reassessment: in effect, they argue, she single-handedly created the star system. Her art lay in pleasing her fans; her genius, in collaborating with the industry's best screenwriters, directors, and cinematographers. But as these pages show, her reputation for cloying little-girl portrayals belied greater versatility and business acumen. Brownlow's enlightening synopses, based on interviews and first-hand accounts, supplement the rare stills Cushman has culled from the archives of AMPAS. A stunning contribution to film history; highly recommended for large public and academic libraries.AJayne Plymale, Univ. of Georgia, Athens
Copyright 1999 Reed Business Information, Inc.

Queen of the Movies

Pickford, The Woman Who Made Hollywood (2007)

Everything You Need to Know About Mary Pickford