The Life and Legend of Louis B. Mayer (livre en anglais) 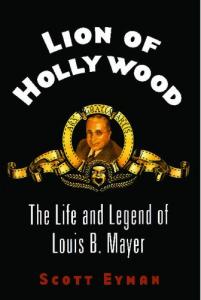 Description de l'ouvrage :
'Lion of Hollywood' is the definitive biography of Louis B Mayer, the chief of Metro-Goldwyn-Mayer -- MGM -- the biggest and most successful film studio of Hollywood's Golden Age. An immigrant from tsarist Russia, Mayer began in the film business as an exhibitor but soon migrated to where the action and the power were, Hollywood. Through sheer force of energy and foresight, he turned his own modest studio into MGM, where he became the most powerful man in Hollywood, bending the film business to his will. He made legendary films, including the fabulous MGM musicals, and he made iconic stars: Garbo, Gable, Garland and dozens of others. Whilst publicly promoting family values to America, he used his influence to place federal judges on the bench, pay off elected officials, cover up his stars' indiscretions, and on occasion, arrange marriages for gay stars. Mayer rose from his impoverished childhood to become at one time the highest-paid executive in America. Despite his power and money, Mayer suffered some significant losses. He was estranged from his daughter Edie and divorced his wife, ending his life alienated from most of his family. His chief assistant, Irving Thalberg, was his closest business partner, but they quarreled frequently, and Thalberg's early death left Mayer without his most trusted associate. As Mayer grew older, his politics became increasingly reactionary, and he found himself politically isolated within Hollywood's small conservative community. 'Lion of Hollywood' is a three-dimensional biography of a figure often caricatured and vilified as the paragon of the studio system. Mayer could be arrogant and tyrannical, but under his leadership MGM made such unforgettable films as 'The Big Parade', 'Ninotchka', 'The Wizard of Oz', 'Meet Me in St. Louis' and 'An American in Paris'.

Revue de Presse :
From Publishers Weekly :
Anyone who's heard one of the legions of tales about obstinate Hollywood founding father Mayer's tyranny over his stars (and the entire studio system) won't be surprised to learn Mayer grew up selling scrap machinery in the eastern Canadian port town of Saint John: "Junk dealing itself made [Mayer] endlessly resourceful and opportunistic," Eyman (Print the Legend: The Life and Times of John Ford) writes in this meticulous and engaging biography. But because Mayer (1885–1957) was a Russian Jew selling scrap metal and was looked down upon by many, he developed his "almost feral belligerence" early on. That ruthlessness may explain his unprecedented consolidation of power once he arrived in Los Angeles in 1918, but not his genius for packaging and selling the nascent and suspicious medium of film to audiences. Mayer's maudlin sentimentality about American values and the virtues of family life (despite major womanizing) surfaced in most of the films he oversaw at Metro-Goldwyn-Mayer—and in what he did to get them made. Mayer's "mania for quality" drove MGM to the top of Hollywood's studio system, while his melodramatic fainting spells and crying jags would frequently induce fellow executives or stars to relent. Eyman's extensive knowledge of old Hollywood, his scrupulous research and his refusal to indict the often-pilloried Mayer make this biography an often revelatory delight. Agent, Fran Collin. (May)
Copyright © Reed Business Information, a division of Reed Elsevier Inc. All rights reserved.

The Epic Life of Cecil B. DeMille

The Life and Times of John Ford

The Meteoric Rise and Tragic Fall of William Fox