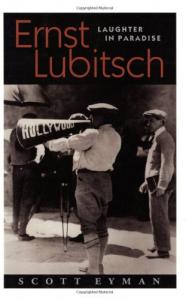 Description de l'ouvrage :
When movie lovers speak of the "Lubitsch touch," they refer to a singular sense of style and taste, humor and humanity, that suffused the films of one of Hollywood's greatest directors. In this first ever full-length biography of Ernst Lubitsch, Scott Eyman takes readers behind the scenes of such classic films as Trouble in Paradise (1932), The Merry Widow (1934), Bluebeard's Eighth Wife (1938), Ninotchka (1939), The Shop around the Corner (1940), To Be or Not to Be (1942), and Heaven Can Wait (1943), which together constitute one of the most important and influential bodies of work in Hollywood. Eyman examines both the films Lubitsch crafted and the life he lived—his great successes and his overwhelming anxieties—to create an indelible portrait of Hollywood's Golden Age and one of its most respected artists.

Revue de Presse :
From Publishers Weekly : Ernst Lubitsch (1892-1947) made elegant, warmly human comedies exuding sexual sophistication, yet in his personal life, notes Eyman, the German-born film director was vulnerable and almost naive. Son of a middle-class Berlin tailor who had escaped the squalor of czarist Russia, Lubitsch moved to Hollywood in 1922 with his first wife, temperamental actress Helene Sonnet Kraus. Her affair with Lubitsch's best friend, screenwriter Hans Kraly, wrecked their marriage, reports Eyman ( Mary Pickford ). Lubitsch's second wife, aristocratic Vivian Gaye, who considered him vulgar, was widely viewed as a gold digger by his friends. As production head of Paramount, Lubitsch encountered a hornet's nest of egos and political intrigue that led to his dismissal in 1936. In an entrancing, revealing biography that illuminates the unique chemistry behind "the Lubitsch Touch," Eyman limns a single-minded director, despised by Hitler, who embodied the classic immigrant experience in Hollywood by giving a European twist to American genres in classics like Ninotchka , Design for Living and Heaven Can Wait. Photos. Copyright 1993 Reed Business Information, Inc.

Revue de Presse :
After starring in and directing silent films in Germany, Lubitsch emigrated to America, where his success continued until he died in 1947. Lubitsch produced, directed, and was the uncredited co-writer on some of the most stylish and sophisticated comedies ever made, including Trouble in Paridise (1932), Ninotchka (1939), and To Be or Not To Be (1942). Eyman's well-researched biography is successful in showing how Lubitsch was similar to, and different from, the characters in his films. While Eyman is not blind to Lubitsch's faults, his admiration is evident. More detailed notes on the sources would have been welcome; nevertheless, this account is highly recommended.- John Smothers, Monmouth Cty. Lib., Manalapan, N.J.Copyright 1993 Reed Business Information, Inc.

The Epic Life of Cecil B. DeMille

The Life and Legend of Louis B. Mayer

The Life and Times of John Ford