« The Making of Citizen Kane » 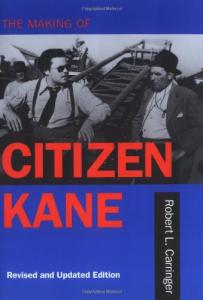 Description de l'ouvrage :
Citizen Kane, widely considered the greatest film ever made, continues to fascinate critics and historians as well as filmgoers. While credit for its genius has traditionally been attributed solely to its director, Orson Welles, Carringer's pioneering study documents the shared creative achievements of Welles and his principal collaborators. The Making of Citizen Kane, copiously illustrated with rare photographs and production documents, also provides an in-depth view of the operations of the Hollywood studio system. This new edition includes a revised preface and overview of criticism, an updated chronology of the film's reception history, a reconsideration of the locus of responsibility of Welles's ill-fated The Magnificent Ambersons, and new photographs.

Description de l'ouvrage :
Ever since Pauline Kael wrote her controversial essay "Raising Kane" (available in print in her omnibus collection For Keeps), film fans and scholars have debated the "authorship" of Citizen Kane. Most audiences and critics agree that it is one of the greatest American movies, but Kael claimed that the genius behind Kane was not writer-director-producer-actor Orson Welles, but coscenarist Herman Mankiewicz. Others attribute the film's power to the influence and contributions of John Houseman or the incredible innovations of cinematographer Gregg Toland. In this superbly researched book, Robert Carringer proves conclusively that Kane is not the product of any individual artist, but the collective work of a brilliant team working under Welles's supervision. Without Mankiewicz, Toland, and the talented designers and technicians who worked on the film, Kane could never have become what it is. As Carringer covers each step of the film's production, from conception to final release, he leads readers through the enormously complex process of making a great movie. He also provides an introductory chapter about an unfilmed project Welles worked on before Kane, an adaptation of Joseph Conrad's Heart of Darkness. In his concluding chapter on The Magnificent Ambersons, Welles's follow-up to Kane, Carringer argues that the latter film suffered precisely because its collaborators failed to achieve the artistic harmony that had made Kane so successful. --Raphael Shargel

Revue de Presse :
From Library Journal : It seems that the moviegoing public just can't get enough of Orson Welles and Charlie Kane (see Video Reviews, this issue, p. 98). Carringer's 1985 volume offers and a nuts-and-bolts description of Kane's production. This revised and updated edition has been enlarged to include a new preface, new photos, and a discussion of Welles's second feature, The Magnificent Ambersons. Though volumes on Orson and Kane abound, this "is well researched and generally well written" (LJ 7/85). Considering Kane's importance to American film, this is essential for all movie collections. If you're talking movies, you're talking Kane.Copyright 1996 Reed Business Information, Inc.

Sujet : Un Film > The Other Side of the Wind