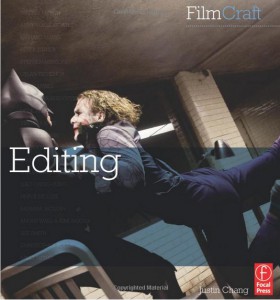 Description de l'ouvrage :
The value of the editor's craft to a finished film cannot be underestimated, and it's no surprise that directors rely heavily on the same editor again and again. This book employs stills and screenshots to show how an editor created a scene with the filmmaker and explores the complex relationship between a director who has just shot a movie and the editor who must complete the director's vision. Includes perspectives from Dylan Tichenor who has worked on Boogie Nights, Brokeback Mountain, There Will Be Blood and many others and Pietro Scalia, the great editor whose partners include Bertolucci, Van San, and Ridley Scott.

Each book in the FilmCraft Series focuses on a specific aspect of the filmmaking process, presenting a visually strunning look at the subject through the eyes of notable professionals in each field. Each book offers deep insight into the working practices of the world's most distinguished professionals, covering their inspiration, collaboration, and work on set. Each professional has been interviewed exclusively, and goes into detail on specific scenes in their films to give concrete examples of their craft. The result is to provide readers with a fascinating inside look at the filmmaking art, and a wealth of knowledge that they can apply to their own work.

Biographie de l'auteur :
Justin Chang is senior film critic at Variety, editing and overseeing the paper's film reviews. He currently serves as secretary of the Los Angeles Film Critics Association. He holds a journalism degree from USC. Before joining Variety in 2004, he was a freelance entertainment writer for the Orange County Register and the Los Angeles Times.

Revue de Presse :
"Again, while Film Craft: Editing is not a textbook, it gives so many hints and tips on how many of the top editors of the industry think and work, one can glean remarkable insights from their experiences. What comes out from the interviews are candid stories of experiences from different film projects. Most of all the sheer enthusiasm and love of film and their art of editing bursts from the page."--Impulsegamer

"FilmCraft is a new series from Focal Press that deconstructs the art of cinema by studying it from the inside. Each volume in the collection focuses on a different aspect of film production by gathering interviews with master craftsmen, who are able to relay a lifetime of experience in a series of intimate and informal conversations. The first two installments, Editing (Justin Chang) and Cinematography (Mike Goodridge and Tim Grierson), set a high bar for future volumes and are easily recommended sources of information and understanding. Editing and Cinematography are both highly recommended reading for anyone who enjoys movies and has an interest in learning more about the process. There is nothing here that feels like a textbook, but the insight provided within can be held up against any film school lecture and benefits from offering the views of more than a dozen teachers. Take my advice and pick up these books immediately."--HorrorTalk.com

"Based on the interviews in Justin Chang's book, I believe editors deserve more than their well deserved industry accolades. They deserve a space in the public consciousness. Sure, actors are the draw for most audiences. There has always been a matinee idol, be it Tom Cruise, Clint Eastwood or Errol Flynn, to help fill theater seats. And there are the rock-star directors: Martin Scorsese, Steven Spielberg, Quentin Tarantino. Many of whom get their name above the title. But after reading 'Editing,' you realize that the editor is the second head on the director's body; equally responsible for the story, performances and impact of a film."--review on 957kjr.com

"I'm a firm believer in the philosophy that says the more you know about something, the more fun it is. And, since I'm (obviously) a die-hard film fan, I'm always trying to add to my knowledge of movies - and yours too, if I can help it. In that vein, I'd like to recommend an excellent new pair of books that examine the process of crafting films - in fact, the book series is called 'Filmcraft,' and the first two volumes are 'Cinematography' by Mike Goodridge and Tim Grierson, and 'Editing' by Justin Chang. (Focal Press, $29.95 each) Those are two apt choices, because though the concepts are simple - essentially, cinematography is how you shoot a film and editing is how you puts those shots together - the actual processes are quite complicated. Thankfully, the Filmcraft books explain them in an entertaining way, using interviews with masters of each discipline and lots of concrete examples from films you've probably seen to illustrate their points. You can read them straight through or just pick a page with a movie you like and learn how it was made. If you're like me, you'll wind up reading the whole book this way and probably - add a few movies to your 'to watch' list in the process. Big and colorful, each book is laid out like a magazine, with plenty of art, sidebars and bits of extra information. For example, I learned that Michael Kahn, who edited 'Schindler's List,' got his first job working on 'Hogan's Heroes.' See? I told you knowledge can be fun!"--Rockford Register and the Record Herald

"Among the notable names discussing their craft: Walter Murch, Dylan Tichenor, Stephen Mirrione, and Joel Cox. There are Legacy chapters for people such as Quentin Tarantino's trusted editor, the late Sally Menke. The subjects explain how the tone of a scene can be dramatically impacted based on the way it is cut, and discuss the pros and cons of editing digitally vs. on film. In the sidebars, you'll get fascinating stories behind some of your favorite movies. Tichenor reveals how Boogie Nights had a small number of frames removed each time it went before the MPAA, until they finally got the R rating. Virginia Katz, meanwhile, discusses her choice to keep Jennifer Hudson primarily in close-up for her show-stopping Dreamgirls number, 'And I'm Telling You I'm Not Going,' in order to 'convey a sense of her isolation.'"--The Aisle Seat

"It was my pleasure recently to get a look at two filmmaking books in new series called FilmCraft from Elsevier's Focal Press. Large, square, and in full color with handsome layouts, you might mistake them at first for art or photography books. They wouldn't, in fact, look out of place on a coffee table. But there is much more inside to enjoy than browsing pretty movie stills: they are chock full of information and wisdom on their respective crafts."--MakingTheMovie

"I also liked these books because they weren't just a look at American editors and cinematographers, but a worldwide view of the processes and how these artists have been influenced by the culture and country they work in. These are fascinating and worthwhile books that really explore in-depth the masterful work of these artists. They are also in no way textbooky in their presentation. Both are great coffee table books and an ideal catalyst for a discussion about movies whether your guests enjoy art films or commercial movies. I highly recommend Editing and Cinematography from FilmCraft. They are wonderful editions to any film lover's library!"--Stuff We Like.com

"In his introduction to Editing, author Justin Chang admits film editing is a "uniquely difficult discipline to understand, let alone discuss." Chang interviews 17 of the world's leading editors in his efforts to better understand the 'difficult discipline.' The result is an absorbing journey through the creative decisions and individual stylistic approaches of various film editors working today in both film and digital media. Each tell their own story from their unique perspective."--Peteduel Wordpress.com

"It's not every day that you get to read interviews with some of the best film editors in movieland. Until now! FilmCraft: Editing takes us into the minds of film editors who have worked on films such as 'The Hurt Locker', 'SpiderMan', 'There Will Be Blood' and many more. We get to see how they worked with the director to bring us the films that captivate us. What made them decide to use a certain shot while going through the hours of film that was shot and why did others end up on the cutting room floor. A great book for film editors and film buffs!"--OnScreenAndBeyond.com

"As a one-time photography student who's inner shutterbug has recently reawakened after decades of dormancy, I've amassed a large collection of books on the subject as a general refresher course on the basics (which are all pretty much new to me, now, seeing as how the last SLR camera I owned used actual film). Of these many books, it seems that all of my personal favorites come from a company called Focal Press, as not only are their books geared more toward the serious enthusiast, but they're also real easy on the eyes, with loads of gorgeous and inspiring photos, and a hip design that makes them a joy to read (and re-read)."--HorrorView.com

"Ever wanted advice from today's most respected film insiders? Look no further than the FilmCraft Series, the latest books in filmmaking featuring a visually stunning look at each topic through the eyes of respected professionals in each field. The first releases in the series, entitled 'FilmCraft: Editing' by Justin Chang and 'FilmCraft: Cinematography,' by Mike Goodridge and Tim Grierson, each offer deep insight into the working practices of the world's most distinguished professionals, covering their inspiration, collaboration, and work on set.  These two installments in the FilmCraft Series feature interviews from Bob Murawski, (Oscar-winning Editor for 'The Hurt Locker,' 'Spiderman'), Dylan Tichenor (Editor: 'Boogie Nights,' 'Brokeback Mountain', 'There Will Be Blood'), Pietro Scalia (Editor: 'Gladiator,' 'Good Will Hunting,' 'JFK,' 'Black Hawk Down'), and Vittorio Storaro (Cinematographer: 'Apocalypse Now') to name a few."--DIY Film Festival.blogspot.com

"As someone who edits my own film projects this book offers a great look into the minds of some truly exceptional editors who have worked on some of the greatest movies of our time. Each chapter is the story of another editor in their own voice adding a conversational aspect to the book that makes it a quick and easy read. The information that has been gathered is great to flow through as not only these peoples stories unfold but in some cases the history of film is laid open.--DigitalHippos.com