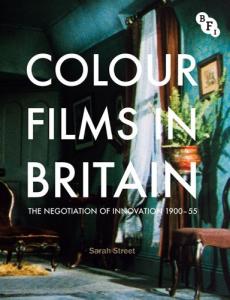 Description de l'ouvrage :
Colour Films in Britain is the first nationally-focused study of colour style and technology. Unlike the coming of sound, colour did not revolutionise the film industry overnight, and charting the British experience of colour offers fascinating insights into the complex network of issues that accompany the introduction of new technologies. This book reveals how the introduction of colour into British film was controversial - greeted by some as an exciting development with scope for developing a uniquely British aesthetic, while others feared its impact on audiences accustomed to seeing black-and-white films that were frequently praised as being superior. Yet many British inventors and filmmakers were captivated by the possibilities created by colour, exploiting different processes and producing films that demonstrated remarkable experimentation and quality. Beautifully illustrated by stills from a range of important short and feature films and with analyses of many celebrated and lesser known films including The Open Road, The Glorious Adventure, This Is Colour, Blithe Spirit, This Happy Breed, Black Narcissus, The Red Shoes, The Tales of Hoffmann and Moulin Rouge, this book details the unique contribution of the many British technicians and directors who negotiated their way through the various economic, technical and aesthetic challenges posed by colour in the first half of the twentieth century. A new history of British cinema is mapped - a history in which colour played an important role throughout several decades. The book includes a Technical Appendix by Simon Brown, providing further details of the large number of colour processes highlighted in the book.

Revue de Presse :
'Sarah Street's groundbreaking study is that rare film history text which is at once absolutely authoritative, and pitched at a very high level in terms of discourse, but still readily accessible to the general reader. In addition, the volume is richly - and I mean intensely - illustrated with numerous, exquisitely printed frame blowups from the many films it examines, all in full color, and Street's analysis of the development of color, not only in the commercial British cinema, but also in the the experimental work of artists such as Len Lye, is meticulous and detailed.' - Wheeler Winston Dixon, Ryan Professor of Film Studies at the University of Nebraska-Lincoln, USA, 'Framd by Frame', UNiversity of Nebraska-Lincoln's Film Blog http://blog.unl.edu/dixon/2012/12/26/colour-films-in-britain-the-negotiation-of-innovation-1900-1955/ Read 'Britain's wonderful worlds of colour', John Wyver's article about the book on the Illuminations blog: http://www.illuminationsmedia.co.uk/2012/12/britains-wonderful-worlds-of-colour/

Biographie de l'auteur :
Sarah Street is a professor of Film at the University of Bristol, UK. She has published extensively in the areas of British cinema; film industry policies and economics; film costume; mise-en-scène and set design. Her publications include Cinema and State: the Film Industry and the British Government, 1927-84 (co-authored with Margaret Dickinson, BFI, 1985); British National Cinema (Routledge, 1997; 2nd edition 2008); British Cinema in Documents (Routledge, 2000); Costume and Cinema: Dress Codes in Popular Film (Wallflower, 2001) and Transatlantic Crossings: British Feature Films in the USA (Continuum, 2002). Her latest books are Black Narcissus (I.B. Tauris, 2005) and Film Architecture and the Trans-national Imagination: Set Design in 1930s European Cinema (co-authored with Tim Bergfelder and Sue Harris, Amsterdam University Press, 2007). She has also co-edited four books, European Cinema: an Introduction (with Jill Forbes, Macmillan/Palgrave, 2000); Moving Performance: British Stage and Screen (with Linda Fitzsimmons, Flicks Books, 2000), The Titanic in Myth and Memory: Representations in Visual and Literary Culture (with Tim Bergfelder, I.B. Tauris, 2004) and Queer Screens: A Screen Reader (with Jackie Stacey, Routledge 2007). She is a co-editor of Screen and of The Journal of British Cinema and Television.