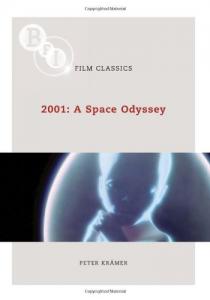 Description de l'ouvrage :
Stanley Kubrick's 2001: A Space Odyssey (1968) is widely regarded as one of the best films ever made. It has been celebrated for its beauty and mystery, its realistic depiction of space travel and dazzling display of visual effects, the breathtaking scope of its story, which reaches across millions of years, and the thought-provoking depth of its meditation on evolution, technology and humanity's encounters with the unknown. 2001 has been described as the most expensive avant-garde movie ever made and as a psychedelic trip, a unique expression of the spirit of the 1960s and as a timeless masterpiece. Peter Krämer's insightful study explores the complex origins of the film, the unique shape it took and the extraordinary impact it made on contemporary audiences. Drawing on new research in the Stanley Kubrick Archive at the University of the Arts London, Krämer challenges many of the widely-held assumptions about the film. He argues that 2001 was Kubrick's attempt to counter the deep pessimism of his previous film, Dr Strangelove (1964), which culminates in the explosion of a nuclear 'doomsday' device, with a more hopeful vision of humanity's future, facilitated by the intervention of mysterious extra-terrestrial artifacts. This study traces the project's development from the first letter Kubrick wrote to his future collaborator Arthur C. Clarke in March 1964 all the way to the dramatic changes Kubrick made to the film shortly before its release by MGM in April 1968. Krämer shows that, despite – or, perhaps, because of – Kubrick's daring last-minute decision to turn the film itself into a mysterious artifact, 2001 was an instant success with both critics and general audiences, and has exerted enormous influence over Hollywood's output of science fiction movies ever since. The book argues that 2001 invites us to enjoy and contemplate its sounds and images over and over again, and, if we are so inclined, to take away from it an important message of hope.

Revue de Presse :
'In this excellent addition to the BFI's Film Classics series, Kramer lovingly explores the genesis of both film and novel, as well as the film's reception and cultural impact.' - The Guardian '...this volume skilfully condenses four decades of cinema studies, academic insights and retrospective analyses...a worthwhile addition to the growing library of informed texts about 2001, Kramer's book captures something of Kubrick's vaulting ambitions, and Clarke's impeccable mastery of SF modes...' - The Zone 'Chapter six contains the best narrative description of 2001 I've ever read' - Anthony Frewin inSight & Sound 'The inclusion of recently released archive material by itself constitutes a significant addition to the body of writing on the Kubrick oeuvre. And while the film itself remains (to my mind) frustratingly ambiguous, Kramer's account of its creation and his interpretation provide a useful introduction for viewers and students coming to the film for the first time.' - Sheamus Sweeney, Historical Journal of Film, Radio and Television

Biographie de l'auteur :
PETER KRAMER is a Senior Lecturer in Film Studies at the University of East Anglia, UK. He has written and edited a number of books, including Screen Acting (1999), The Silent Cinema Reader (2004) and The New Hollywood: From Bonnie and Clyde to Star Wars (2005).

Stanley Kubrick, Arthur C. Clarke, and the Making of a Masterpiece