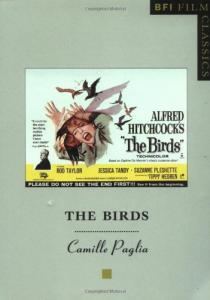 Description de l'ouvrage :
Camille Paglia draws together in this text the aesthetic, technical and mythical qualities of Alfred Hitchcock's The Birds (1963), and analyzes its depiction of gender and familial relations.

Présentation Amazon :
BFI Film Classics are a treasure, featuring some of the most imaginative recent writing on movies and the film industry. In each little book of the series, an important essayist explores the planning, production, and meaning of a single classic film. We've already been treated to Laura Mulvey on Citizen Kane, David Thomson on The Big Sleep, and Salman Rushdie on The Wizard of Oz. Camille Paglia on The Birds seems like the next, natural step!
Paglia brings her characteristic blend of autobiography, psychoanalysis, kinky vampirism, 1960s radicalism, and contempt for scholarly jargon to her discussion of The Birds, Hitchcock's vision of Mother Nature's vengeance on the humans who have desecrated her. Paglia says she has loved the movie since it first flew into theaters in 1963: "Overwhelmed by the film when I saw it as an impressionable teenager, I view it as a perverse ode to women's sexual glamour, which Hitchcock shows in all its seductive phases, from brittle artifice to melting vulnerability.... In this film, as in so many others, Hitchcock finds woman captivating but dangerous. She allures by nature, but she is the chief artificer in civilization, a magic fabricator of persona whose very smile is an arc of deception."
As enthusiastic about the film as Mrs. Bundy (the movie's amateur ornithologist) is about birds, Paglia is somewhat birdlike herself in her observations. As you read the scene-by-scene analysis of the movie, you can feel her perched on your shoulder, watching it with you, chirping loquaciously--and sometimes ironically: "The birds ... soar up from behind the schoolhouse like a cloud of bats. Academe breeds nightmares." And, "After the first flash of real horror, I generally settle down to laughing and applauding the crows, whom I regard as Coleridgean emissaries vandalizing sentimental Wordsworthian notions of childhood." Of the heroine, the overly curious socialite Melanie Daniels, Paglia remarks, "She is living up to her name--a Daniels who enters the lion's den."
Paglia augments her observations with quotations from Hitchcock, his collaborators, and some of the most important essays written about the film. She also adds an appendix summarizing the film's gory plot under the heading "Melanie Daniels' Social Calendar." Full production credits and a helpful bibliography round out the volume. No fan of Hitchcock, Paglia, or The Birds will want to miss this unique and evocative discussion of a film classic. --Raphael Shargel