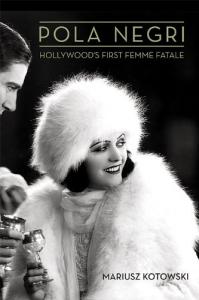 Description de l'ouvrage :
Pola Negri (1897--1987) rose from an impoverished childhood in Warsaw, Poland, to become one of early Hollywood's greatest stars. After tuberculosis ended her career as a ballerina in 1912, she turned to acting and worked under legendary directors Max Reinhardt and Ernst Lubitsch in Germany. Negri preceded Lubitsch to Hollywood, where she quickly became a fan favorite thanks to her beauty, talent, and diva personality. Known for her alluring sexuality and biting artistic edge, she starred in more than sixty films and defined the image of the cinematic femme fatale.

Author Mariusz Kotowski brings the screen siren's story to English-speaking audiences for the first time in this fascinating biography. At the height of her fame, Negri often portrayed exotic and mysterious temptresses, headlining in such successes as The Spanish Dancer (1923) and Forbidden Paradise (1924), before returning to Europe in the 1930s. The devastating effects of World War II soon drove her back to the United States, where she starred in Hi Diddle Diddle (1943) and pursued her vaudeville career before retiring from the entertainment industry.

Kotowski also illuminates Negri's dramatic personal life, detailing her numerous love affairs -- including her engagement to Charlie Chaplin and her romance with Rudolph Valentino -- as well as her multiple marriages. This long-overdue biography not only paints a detailed portrait of one classic Hollywood's most intriguing stars and the film industry's original Jezebel, but also explores the link between Hollywood and European cinema during the interwar years.

Revue de Presse :
"By and large, this is a full account of the Negri legend. It's all here -- from the jewels, the husbands, and the misadventures in Nazi Germany to the trumped-up feuds, the adoring fans, and the pet cheetah that, allegedly, was Negri's companion at home, on the streets, and inside the studios. Kotowski tells the story with finesse." -- Leonard J. Leff, author of Hemingway and His Conspirators

""This is a very special book written on a very special movie star--the kind they don't make any more, and actually, the kind they never did make except for her. Mariusz Kotowski has done a fantastic job of bringing to life the full story, both on and off screen, of a wonderfully talented, colorful, and fascinating woman. His dedication to Negri's career deserves everyone's respect. Pola Negri deserves attention, and this book brings it in just the right way. Highly recommended."--Jeanine Basinger, author of I Do and I Don't: A History of Marriage in the Movies" --

A Biography of the Silent Screen Vamp, with a Filmography

Queen of the Movies

Pickford, The Woman Who Made Hollywood (2007)