The Incredible Life and Times of Hollywood's Most Iconoclastic Producer... (livre en anglais) 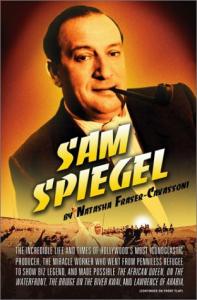 Description de l'ouvrage :
The incredible life and times of Hollywood's most iconoclastic producer, the miracle worker who went from penniless refugee to show biz legend, and made possible "The African Queen, On the Waterfront, The Bridge on the River Kwai" and "Lawrence of Arabia," not to speak of many more, including movies as distinct as "Suddenly, Last Summer; Nicholas and Alexandra; The Last Tycoon; " and "Betrayal; " all of them sharing the unique vision that earned Spiegel twenty-five Oscars: star-filled, bigger-than-life, conceived on a vast scale, intensely dramatic, and overwhelmingly ambitious.
In this rich and brilliant biography, Natasha Fraser-Cavassoni, who had the advantage of knowing and working for Spiegel, brings into sharp focus a Hollywood legend who was at once crafty, unscrupulous, mendacious, and equally capable of great charm and petty meanness, who was sentimental and ruthless, a shrewd judge of talent, a gambler on a colossal scale, a man of almost unique artistic vision and courage who was, in the final analysis, that most elusive and rare of movie producers, a genius.
The story of a how a Jewish refugee without a penny to his name managed to produce several of the greatest films of all time is alone worth telling, but Natasha Fraser-Cavassoni has done more; she has drawn the definitive portrait of the man himself -- the elusive, witty, cynical adventurer who, like so many refugees, was able to live, succeed, and raise money everywhere, but who was at home nowhere. Spiegel surrounded himself with luxury and beautiful women but remained a loner despite his countless friends.
Spiegel was mysterious about his origins, prompting Arthur Miller to refer to him as "The GreatGatsby." In reality, he was born of middle-class Jewish parents in the last years of the Austro-Hungarian Empire. Raised in Jaroslav, in western Galicia, Spiegel left home in his late teens and quickly became a hero of the Hashomer Hatzair, a Zionist youth movement.
Step by step, with immense research and a vast number of interviews, Natasha Fraser-Cavassoni recreates the world of Sam Spiegel's childhood and youth, separating often self-serving fiction from fact. She follows Spiegel's dramatic flight from the Nazis in Berlin, a prison sentence in London, problems with the police in Paris and Mexico City, and finally his arrival in Los Angeles. In America his career languished for a time, though he acquired a reputation for being a supreme "fixer," a brilliant luftmensh on the fringes of Hollywood power, the ultimate party-giver who knew everybody's secrets and was always quick to charm women and take advantage of men. Billy Wilder called him "a modern day Robin Hood, who steals from the rich and steals from the poor."
With a brilliant sense of time and place and a deep understanding of Spiegel's complex personality, Fraser-Cavassoni traces his disasters, successes, romances, friendships, and tangled finances in a narrative that is rich with colorful Spiegel stories, scandals, and bon mots.
The cast of characters in Spiegel's life includes Lauren Bacall, Humphrey Bogart, Marlon Brando, Montgomery Clift, Robert De Niro, Barry Diller, David Geffen, Katharine Hepburn, John Huston, Elia Kazan, David Lean, Joseph L. Mankiewicz, Mike Nichols, Harold Pinter, Otto Preminger, Elizabeth Taylor, Gore Vidal, Orson Welles, Billy Wilder, Darryl F. Zanuck, bevies of beautiful women, three wives, countless members of high society, and, most important, Sam Spiegel himself -- the last of the great independent film producers who, in the swashbuckling tradition of David O. Selznick and Sam Goldwyn, operated alone, aimed high, and believed, above all, in their own star.
More than a major book about the movie business, "Sam Spiegel" is an intricate and engrossing biography, comparable in its richness, depth, and attention to detail to A. Scott Berg's acclaimed biography of Samuel Goldwyn. It is a marvelous, once-in-a-lifetime reading experience and an astonishing debut for Natasha Fraser-Cavassoni.

Revue de Presse :
From Publishers Weekly : Spiegel (1903-1985) won three Oscars for producing, as the subtitle coyly mentions, a series of memorable films; he is also the sole producer to win the best picture Oscar three times within eight years. The resourceful Spiegel arrived in the U.S. from Austria in 1927 as a bogus diplomat, bouncing checks and serving jail time. In Berlin, he worked with Universal Studios' German film office. Fleeing Nazis, he moved on to London, Paris and Mexico, always encountering problems with the law. Back in the U.S. in 1939, he established himself in Hollywood with Tales of Manhattan (1942) and The Stranger (1946). Accused of "sharklike behavior," Spiegel was a hardened wheeler-dealer who "walked in without a penny and made himself into something." By the end of his life, he'd banked millions, acquired a priceless art collection and entertained the century's most glamorous figures. Fraser-Cavassoni writes for Harper's Bazaar's French edition and worked on Spiegel's final film, Betrayal (1983). To separate facts from apocryphal accounts, she conducted some 200 interviews over seven years. Although she often questions Spiegel's exaggerated anecdotes, Fraser-Cavassoni views Spiegel as "the last of the great showmen," possessed by a "demonlike pursuit for quality." Working from Spiegel's private and professional papers, she also explored dozens of archives, reflected in more than 90 pages of notes, a filmography and bibliography. The result is a fantastic biography on the rise of one of Hollywood's most flamboyant personalities. Photos not seen by PW.Copyright 2003 Reed Business Information, Inc.

Présentation Amazon :
Prior to this meticulously researched biography, legendary producer Sam Spiegel had loomed large in countless Hollywood memoirs, but was rarely the subject of close examination. Praiseworthy for negotiating a maze of apocryphal stories and unverified details, Sam Spiegel solves many of the mysteries resulting from the falsehoods of "Spiegelese," for the renowned producer--whose crowning achievements included The Bridge on the River Kwai and Lawrence of Arabia--was perhaps the most inventive liar to gain prominence in Hollywood. With a refreshing absence of judgment, this unflinching study portrays Spiegel as a consummate manipulator, hedonist, philanderer, absentee father, sexaholic (a foot fetishist who favored young girls well into his '70s), and globetrotting entertainer of the social elite, "incapable of guilt" and so charming that he could achieve miracles (and numerous faked heart attacks, to disarm his detractors) while producing some of the greatest films of Hollywood's post-Golden era.
As a first-time biographer, Natasha Fraser-Cavassoni (a French journalist who worked as an assistant on Spiegel's final film, 1983's Betrayal) fails to plumb the depths of Spiegel's enigmatic character (so effectively hidden behind his luxurious lifestyle), offering little insight into Spiegel's unique combination of intellect and roguish insincerity. She compensates with a journalist's greatest assets: exacting research and seemingly limitless access to Spiegel's surviving contemporaries, from the late Billy Wilder to On the Waterfront director Elia Kazan and many, many others. The result is a fair and balanced portrait of one of Hollywood's classiest scoundrels, a master thief with impeccable taste and an uncanny instinct for cinematic prestige. --Jeff Shannon