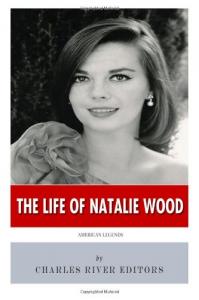 Description de l'ouvrage :
*Includes pictures. *Includes Wood's quotes about her own life and career. *Includes a bibliography for further reading.
"Stardom is only a byproduct of acting. I don't think being a movie star is a good enough reason for existing.” – Natalie Wood
A lot of ink has been spilled covering the lives of history's most influential figures, but how much of the forest is lost for the trees? In Charles River Editors' American Legends series, readers can get caught up to speed on the lives of America's most important men and women in the time it takes to finish a commute, while learning interesting facts long forgotten or never known.
Few actresses have ever gotten off to the kind of career start that Natalie Wood did during the 1950s. After appearing in film and on TV as a child, Wood broke out by appearing in the classic Rebel Without a Cause alongside James Dean in 1955, despite the fact she was still just 15 years old. She earned an Oscar nomination for Best Supporting Actress in that role, one of three Academy Award nominations she would rack up before the age of 25. That included starring in Splendor in the Grass (1961), West Side Story (1961), and Gypsy (1962), and altogether, she was in over 50 films, .
Given that she was a successful actress for several decades, it's no surprise that Wood generated a lot of press during her career, and her personal life was tabloid fodder in particular. When she married star actor Robert Wagner, they had one of Hollywood's most famous and most successful marriages. But Wood was also notorious for relying on psychoanalysts, to the extent that she would become heavily reliant on constantly having access to one.
People were also caught by surprise when Wood retired after the birth of her daughter in 1970, and unfortunately, that has contributed to the fact that she is best remembered today for her mysterious drowning in 1981. Wood was on a boat with Robert Wagner and Christopher Walken when she fell overboard on the night of November 28, and her drowning was ruled accidental, with the coroner noting that she was inebriated and under the effects of pain medication. However, that ruling has been controversial ever since because of the fact that when her body was found, Wood had bruises on her arms and a cut on her cheek, and nobody else on the boat could account for the timing of her disappearance. While the odd circumstances have led some to suspect foul play, investigations have continued over the years and haven't been able to shed much new light on her death.
American Legends: The Life of Natalie Wood examines the life and career of one of America's favorite child stars. Along with pictures of important people, places, and events, you will learn about Natalie Wood like never before, in no time at all.

The Biography of Natalie Wood