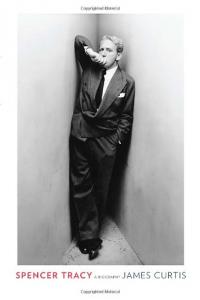 Description de l'ouvrage :
“The best goddamned actor I've ever seen!”—George M. Cohan His full name was Spencer Bonaventure Tracy. He was called “The Gray Fox” by Frank Sinatra; other actors called him the “The Pope.” Spencer Tracy's image on-screen was that of a self-reliant man whose sense of rectitude toward others was matched by his sense of humor toward himself. Whether he was Father Flanagan of Boys Town, Clarence Darrow of Inherit the Wind, or the crippled war veteran in Bad Day at Black Rock, Tracy was forever seen as a pillar of strength. In his several comedy roles opposite Katharine Hepburn (Woman of the Year and Adam's Rib among them) or in Father of the Bride with Elizabeth Taylor, Tracy was the sort of regular American guy one could depend on. Now James Curtis, acclaimed biographer of Preston Sturges (“Definitive” —Variety), James Whale, and W. C. Fields (“By far the fullest, fairest, and most touching account . . . we have yet had. Or are likely to have” —Richard Schickel, The New York Times Book Review, cover review), gives us the life of one of the most revered screen actors of his generation. Curtis writes of Tracy's distinguished career, his deep Catholicism, his devoted relationship to his wife, his drinking that got him into so much trouble, and his twenty-six-year-long bond with his partner on-screen and off, Katharine Hepburn. Drawing on Tracy's personal papers and writing with the full cooperation of Tracy's daughter, Curtis tells the rich story of the brilliant but haunted man at the heart of the legend. We see him from his boyhood in Milwaukee; given over to Dominican nuns (“They drill that religion in you”); his years struggling in regional shows and stock (Tracy had a photographic memory and an instinct for inhabiting a character from within); acting opposite his future wife, Louise Treadwell; marrying and having two children, their son, John, born deaf. We see Tracy's success on Broadway, his turning out mostly forgettable programmers with the Fox Film Corporation, and going to Metro-Goldwyn-Mayer and getting the kinds of roles that had eluded him in the past—a streetwise priest opposite Clark Gable in San Francisco; a screwball comedy, Libeled Lady; Kipling's classic of the sea, Captains Courageous. Three years after arriving at MGM, Tracy became America's top male star. We see how Tracy embarked on a series of affairs with his costars . . . making Northwest Passage and Dr. Jekyll and Mr. Hyde, which brought Ingrid Bergman into his life. By the time the unhappy shoot was over, Tracy, looking to do a comedy, made Woman of the Year. Its unlikely costar: Katharine Hepburn. We see Hepburn making Tracy her life's project—protecting and sustaining him in the difficult job of being a top-tier movie star. And we see Tracy's wife, Louise, devoting herself to studying how deaf children could be taught to communicate orally with the hearing and speaking world. Curtis writes that Tracy was ready to retire when producer-director Stanley Kramer recruited him for Inherit the Wind—a collaboration that led to Judgment at Nuremberg, It's a Mad Mad Mad Mad World, and Tracy's final picture, Guess Who's Coming to Dinner . . . A rich, vibrant portrait—the most intimate and telling yet of this complex man considered by many to be the actor's actor.

Biographie de l'auteur :
James Curtis is the author of W. C. Fields: A Biography; James Whale: A New World of Gods and Monsters; and Between Flops: A Biography of Preston Sturges. Curtis is married and lives in Brea, California.

Revue de Presse :
“Definitive . . . [James Curtis] charts the life, loves and struggles of the Milwaukee-born, Oscar-winning screen legend in expert detail, leaving no source or story unchecked. . . Curtis taps deeply mined remembrances and fresh anecdotes collected in years of interviews with just about everyone in Tracy’s life.”  —Chris Foran, Milwaukee Journal Sentinel    “Definitive . . . well written. . . I marvel at the research.” —David Thomson, The New York Review of Books     “A great story about a great actor. . . [James Curtis] is an excellent researcher and writer . . . definitive . . . belongs in the classic movie fan’s library.”  —Douglass K. Daniel, Associated Press   “Exhaustively researched. . . ” —Jeff Dawson, The Sunday Times “A balanced and intriguing look at one of the screen’s greatest actors . . . Curtis has obtained access to everything from Tracy’s datebooks to his health records . . . all of this research makes possible an incredibly detailed account of Tracy’s life . . . those who remember him will be fascinated; younger readers will be spurred to rent his film and revel in his talent.”  —Booklist (starred)   “Impeccably researched . . . a monumental, definitive biography of one of the finest film actors in the history of the medium.”  —Kirkus