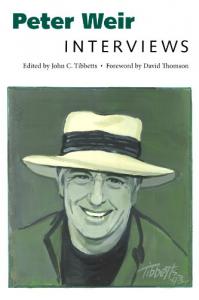 0 :
The first published collection of interviews with the Australian director whose films include the Academy Award-nominated Witness, Dead Poets Society, Green Card, The Truman Show, and Master and Commander

Description de l'ouvrage :
Peter Weir: Interviews is the first volume of interviews to be published on the esteemed Australian director. Although Weir (b. 1944) has acquired a reputation of being guarded about his life and work, these interviews by archivists, journalists, historians, and colleagues reveal him to be a most amiable and forthcoming subject. He talks about "the precious desperation of the art, the madness, the willingness to experiment" in all his films; the adaptation process from novel to film, when he tells a scriptwriter, "I'm going to eat your script; it's going to be part of my blood!"; and his self-assessment as "merely a jester, with cap and bells, going from court to court." He is encouraged, even provoked to tell his own story, from his childhood in a Sydney suburb in the 1950s, to his apprenticeship in the Australian television industry in the 1960s, his preparations to shoot his first features in the early 1970s, his international celebrity in Australia and Hollywood. An extensive new interview details his current plans for a new film.
Interviews discuss Weir's diverse and impressive range of work--his earlier films Picnic at Hanging Rock, The Last Wave, Gallipoli, and The Year of Living Dangerously, as well as Academy Award-nominated Witness, Dead Poets Society, Green Card, The Truman Show, and Master and Commander. This book confirms that the trajectory of Weir's life and work parallels and embodies Australia's own quest to define and express a historical and cultural identity.

Revue de Presse :
"It is the sort of historical document which will get more valuable over the years, and we should all be grateful to John C. Tibbetts for writing it."
--Kevin Brownlow