The Art of the Hollywood Epic (livre en anglais) 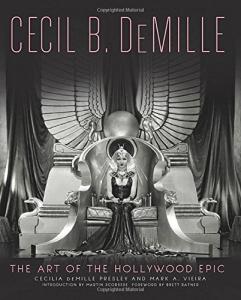 Description de l'ouvrage :
Colossal. Stupendous. Epic. These adjectives, used by movie companies to hawk their wares, became clichés long ago. When used to describe the films of one director, they are accurate. More than any filmmaker in the history of the medium, Cecil B. DeMille mastered the art of the spectacle. In the process, he became a filmland founder. One hundred years ago, he made the first feature film ever shot in Hollywood and went on to become the most commercially successful producer-director in history.
DeMille told his cinematic tales with painterly, extravagant images. The parting of the Red Sea in The Ten Commandments was only one of these. There were train wrecks (The Greatest Show on Earth); orgies (Manslaughter); battles (The Buccaneer); Ancient Rome (The Sign of the Cross); Ancient Egypt (Cleopatra); and the Holy Land (The Crusades). The best of these images are showcased here, in Cecil B. DeMille: The Art of the Hollywood Epic.
This lavish volume opens the King Tut's tomb of cinematic treasures that is the Cecil B. DeMille Archives, presenting storyboard art, concept paintings, and an array of photographic imagery. Historian Mark A. Vieira writes an illuminating text to accompany these scenes. Cecilia de Mille Presley relates her grandfather's thoughts on his various films, and recalls her visits to his sets, including the Egyptian expedition to film The Ten Commandments.
Like the director's works, Cecil B. DeMille: The Art of the Hollywood Epic is a panorama of magnificence—celebrating a legendary filmmaker and the remarkable history of Hollywood.

Biographie de l'auteur :
Cecilia de Mille Presley, vice-chairman for the National Film Preservation Foundation, has been a leading activist for the preservation of our cinematic history for many years. She produces documentaries, is a long-time benefactor to the Academy of Motion Picture Arts and Sciences, and currently serves on the boards of the American Film Institute, the Chapman University School of Film and Cinema, UCLA's School of Film and Television, and works with the World Society for the Protection of Animals. Presley lives near Los Angeles.

Mark A. Vieira is a photographer and writer who specializes in Hollywood history. He has lectured at USC, UCLA, Lincoln Center, Universal Studios, the Hollywood Heritage Museum, and the Palm Springs Film Festival. Vieira has appeared in documentaries such as TCM's Moguls and Movie Stars, Playboy's Sex at 24 Frames Per Second, and the BBC's Shooting the Stars. He is also the author of George Hurrell's Hollywood, Greta Garbo: A Cinematic Legacy, and Majestic Hollywood, among other film-related titles. Vieira resides in Los Angeles.

“An opulently beautiful photographic history of the director.”—VanityFair.com
“This book, by Cecilia deMille Presley and Mark Vieira, is everything DeMille's movies were — stupendous, lavish, colorful, too much and not enough. It is packed with fabulous photos — of the great DeMille stars, mammoth sets, costume sketches. And chock full of anecdotes about the man himself.”—Liz Smith, NewYorkSocialDiary.com

On Set With Hollywood's Greatest Directors

A Journey Through the Stars

Movie-Star Portraits of the Forties (2011)

Film-Star Portraits of the Fifties (2011)

The Lives of the Stars Between Takes