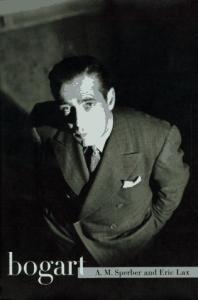 Description de l'ouvrage :
He was a top box-office draw in his day, an Oscar-winning actor, a principled man of rare conviction, and--long after his death--a cult figure revered by moviegoers who weren't even born while he was making his movies. But over the years, Humphrey Bogart has remained an enigma, despite what we have learned of him from wife Lauren Bacall's own fond memories and from the various biographies that have appeared over the years since his death in 1957.
With Bogart, this wonderful enigma is brought under the light as never before. Although authors Ann M. Sperber and Eric Lax never met, Bogart is a unique collaboration, combining the strengths of two prize-winning biographers. Sperber, the author of the New York Times best-selling Pulitzer-Prize finalist Murrow: His Life and Times (1986), spent seven years before her death in 1994 amassing a vast archive of original research on the life and times of Humphrey Bogart, including more than 200 interviews she conducted with people who had known and worked with him, including Katharine Hepburn and John Huston. Eric Lax, whose Woody Allen was a national bestseller in 1991, took over the project after Sperber's death and spent two years completing it. The result is the definitive portrait of the actor who merged his screen anti-heroism with his own staunch personal integrity in a manner new to Hollywood, fashioning a persona as timely today, forty years after his death, as it was during his own life.

Revue de Presse :
“Dramatic, historically informative, and elegiac, [Bogart] exemplifies an honorable standard in the uneven world of film biographies.” (Kirkus Reviews ) “The last word on a legend.” (Jack Miles, author of God: A Biography ) “An immediate triumph...so rich in its research, so compelling in its writing, it is an absorbing human story of the motion picture business in the age of Humphrey Bogart.” (Los Angeles Times ) “A very well done volume.” (Michiko Kakutani, New York Times ) “This model biography should become the standard study of Bogart.” (Library Journal )

Biographie de l'auteur :
The late A. M. Sperber was born in Vienna, graduated from Barnard College, and was a Fulbright Scholar. She authored the critically acclaimed bestseller and Pulitzer Prize finalist Murrow: His Life and Times. Bogart is the culmination of the years of research she performed before her death in 1994.

Eric Lax's books include Faith, Interrupted: A Spiritual Journey; The Mold in Dr. Florey's Coat; and the international bestseller Woody Allen. His writing has appeared in The Atlantic, the New York Times, Vanity Fair, and Esquire.

The Life and Extraordinary Afterlife of Humphrey Bogart