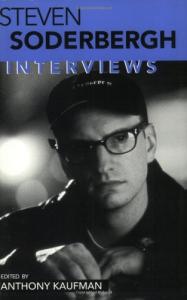 Description de l'ouvrage :
Interviews which chart the rise and fall and rise again of the writer-director-producer's surprising career from 1989 to 2001.

Steven Soderbergh's cinema-making star has blazed with sex, lies, and videotape, sputtered with The Underneath, and flared again with the acclaimed movie Traffic.
Steven Soderbergh: Interviews charts the rise and fall and rise of the writer-director-producer's surprising career from 1989 to 2001. From his "flavor of the month" status with his debut film sex, lies, and videotape to his Academy Award-winning feature Traffic, Soderbergh's road to success is fraught with ups and downs.
On each and every film, the book details such experiences as his creative crisis surrounding his fourth film, The Underneath, and his rejuvenation with the ultra-low budget free-style Schizopolis, and the mainstream achievements that followed with Erin Brockovich and Traffic.
Spanning twelve years, these conversations reveal Soderbergh (b. 1963) to be as self-effacing and lighthearted in his later more established years as he was when just starting out. He comes across as a man undaunted by the glitz and power of Hollywood, remaining, above all, a truly independent filmmaker unafraid to get his hands dirty and pick up the camera himself.
Not only do the interviews provide a glimpse into the filmmaker's aesthetics, but they also offer a history of the U.S. independent film movement in the late 1980s and 1990s--the explosion of "independent films," studios and film festivals, and the Hollywood co-optation of such talents, Soderbergh included. The collection also reveals the increasingly blurred boundaries between independent and mainstream and Soderbergh's commitment to revitalizing cinema from inside the system.
Anthony Kaufman is the former senior editor of indieWIRE.com and is currently a Contributing Writer to indieWIRE.com, and is an instructor of film and media journalism at New York University. He has been published in numerous periodicals such as the Village Voice, Cineaste, Time Out New York, and the Independent Film & Video Monthly.

Revue de Presse :
From Publishers Weekly : Whether they prefer the early, low-budget sex, lies, and videotape or Erin Brockovich, Steven Soderbergh fans will appreciate a new collection of interviews with this year's "It" filmmaker put together by indieWIRE.com editor Anthony Kaufman. Steven Soderbergh: Interviews features conversations with the director that originally appeared in publications like Rolling Stone and the Village Voice, spanning from 1989 to 2000. With his famously self-deprecating sense of humor, the director reflects on all stages of his career, from his phenomenal freshman success with sex, lies through the indie efforts of the mid-'90s to recent blockbusters Out of Sight, Traffic and Ocean's 11.
Copyright 2002 Cahners Business Information, Inc.

The Cinema of Steven Soderbergh (2013)