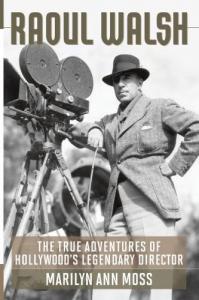 Description de l'ouvrage :
Raoul Walsh (1887--1980) was known as one of Hollywood's most adventurous, iconoclastic, and creative directors. He carved out an illustrious career and made films that transformed the Hollywood studio yarn into a thrilling art form. Walsh belonged to that early generation of directors -- along with John Ford and Howard Hawks -- who worked in the fledgling film industry of the early twentieth century, learning to make movies with shoestring budgets. Walsh's generation invented a Hollywood that made movies seem bigger than life itself.

In the first ever full-length biography of Raoul Walsh, author Marilyn Ann Moss recounts Walsh's life and achievements in a career that spanned more than half a century and produced upwards of two hundred films, many of them cinema classics. Walsh originally entered the movie business as an actor, playing the role of John Wilkes Booth in D. W. Griffith's The Birth of a Nation (1915). In the same year, under Griffith's tutelage, Walsh began to direct on his own. Soon he left Griffith's company for Fox Pictures, where he stayed for more than twenty years. It was later, at Warner Bros., that he began his golden period of filmmaking.

Walsh was known for his romantic flair and playful persona. Involved in a freak auto accident in 1928, Walsh lost his right eye and began wearing an eye patch, which earned him the suitably dashing moniker "the one-eyed bandit." During his long and illustrious career, he directed such heavyweights as Humphrey Bogart, James Cagney, Errol Flynn, and Marlene Dietrich, and in 1930 he discovered future star John Wayne.

Revue de Presse :
"An ideal introduction to the work of a great director and a fascinating man." -- Kevin Brownlow, author of The Search for Charlie Chaplin

"Walsh spun outlandish yarns about his early life, which was colorful enough not to need embellishment. In this extensively researched biography, Moss works hard to separate the teller from the tale." --

"Although Raoul Walsh is now a half-forgotten name in film history, many of his films are still fondly remembered, and this well-written and -researched biography--which benefits from the author's access to scholars and Walsh's family and friends--should help restore luster to his reputation." -- Library Journal

"Moss's work shares much more than Walsh's life. It carries us through the epic history of the American film industry." -- San Francisco Book Review

"Raoul Walsh was Hollywood's forgotten man.... Only now, 30 years after his death, has he been accorded a biography." -- Wall Street Journal

"Moss uncovers some amazing facts and rich anecdotes to color her portrait of this singular movie pioneer." -- Wimgo Movies

"Raoul Walsh is one of the finest film books of the year, and an essential addition to your cinema bookshelf." -- National Board of Review

"A highly readable biography of this legendary filmmaker with more than 150 films to his credit." -- King Features Syndicate, Inc.

"Moss had access to Walsh papers and family stories not previously brought to print and deeply researched this vivid biography of the action-minded but often subtle master." -- San Diego Reader

"Moss... has done an admirable job of examining Walsh's life and accomplishments, sorting out the myths and reestablishing his place in the American pantheon." -- The Washington Post

"This book bursts with facts, color, and charm, and along the way provides the reader with a clear sense of how the director's character infused his art." -- Choice

"This is a book made out of affection, respect and lengthy research - and surely we have waited long enough for a proper account of the life and work of Raoul Walsh in English." -- Sight and Sound

"Moss brings Walsh to life expertly, mining his many contradictions as she separates mythic chaff from factual wheat to give use the fullest portrait of Walsh we are ever likely to get." -- Directors Guild of America Quarterly

"Moss went through archives, talked to survivors, and read memos, letters, reviews, interviews and autobiographies. The scope of this research is the book's lasting achievement. Walsh was a boisterous and engaging character, and the book does make him come alive. After finishing the book, it is hard not to miss him. -- Frames Cinema Journal" -- Fredrik Gustafsson, Frames Cinema Journal

Biographie de l'auteur :
Marilyn Ann Moss is the author of Giant: George Stevens, A Life on Film and has published numerous articles on writers such as Paul Bowles, Theodore Dreiser, and Frank Norris. She was a television critic for The Hollywood Reporter from 1995 to 2009.