The Life and Films of Bela Lugosi (livre en anglais) 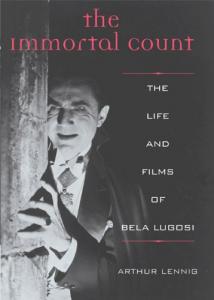 Description de l'ouvrage :
Bela Lugosi won immediate fame for his portrayal of the immortal count in the 1931 film Dracula. After a decade of trying vainly to broaden his range and secure parts to challenge his acting abilities, Lugosi resigned himself to a career as the world's most recognizable vampire. His last years were spent as a forgotten and rather tragic figure. When he died in 1956, Lugosi could not have known that vindication of his talent would come -- his face would adorn theaters, his image would appear on greeting cards and postage stamps, his film memorabilia would sell for more than he earned in his entire career, and his Hungarian accent would be instantly recognized by millions of people.

Martin Landau's Oscar-winning role as Lugosi in the 1994 film Ed Wood added an ironic twist to a career that had ended in oblivion. In 1974, devoted Lugosi fan Arthur Lennig published a highly regarded biography of the unsung actor. More than twice the length of the original and completely rewritten, The Immortal Count provides deeper insights into Lugosi's films and personality. Drawing upon personal interviews, studio memos, shooting scripts, research in Romania and Hungary, and his own recollections, Lennig has written the definitive account of Lugosi's tragic life.

Revue de Presse :
From Publishers Weekly : Lennig's lifelong worship of his subject adds an intensely personal flavor to this biography of the complex horror king, which shines in its ability to respect Lugosi's talent, regardless of personality flaws. A ladies' man and opportunist, Lugosi married his first wife for money, later rewriting her as a great love. After triumphing in Broadway's Dracula, Lugosi (1882-1956) solidified his image with the 1931 film version: as he told the New York Times, "every producer in Hollywood had definitely set me down as a `type.'... I was both amused and bitterly disappointed." Lennig details the key creative tragedy of Lugosi's life: turning down the part of Frankenstein, which enabled Boris Karloff to win it. Lugosi sank permanently to second position in the horror hall of fame. Lennig knowledgeably analyzes every important Lugosi film, and those who don't adore the genre may skim some of the voluminous commentary. But the character details are always engrossing, and Lugosi's declaration that "[e]very actor is somewhat mad, or else he'd be a plumber or a bookkeeper or a salesman" is in keeping with his tormented psyche. Lennig describes the star's last years without maudlin excess, as Lugosi struggles with unemployment, financial problems, depression, drinking and drugs. Like many underappreciated geniuses, Lugosi had to cope with vitriolic reviews; it's heartening that he surmounted them and attained classic status after death. Lennig lucidly illustrates through Lugosi's words why his reputation has continued to grow: "You can't make people believe in you if you play a horror part with your tongue in your cheek... you must believe in it while you are playing it." 75 b&w photos. Copyright 2003 Reed Business Information, Inc.

"Will stand for a long time as the definitive book about the man who incarnated Dracula, to the great detriment of his career." -- Lexington Herald-Leader

"This book is long overdue and is highly recommended as biography, film history and pop culture. It is the last word on Lugosi." -- National Board of Review

"Lennig's lifelong worship of his subject adds an intensely personal flavor to this biography of the complex horror king, which shines in its ability to respect Lugosi's talent, regardless of personality flaws." -- Publisher's Weekly

"Remains passionately personal in its outlook, but thanks to new research and greater availability of films it also offers a more comprehensive and richly detailed study of Bela Lugosi's complex personality." -- Paul M. Jensen

"One comes away from Lennig's book with a deep respect for both Lugosi and the author himself." -- Scary Monsters Magazine

The Lost Years of Bela Lugosi

A Life in Film

The Film Career of Vincent Price, In His Own Words

More Than a Monster