The Film Career of Vincent Price, In His Own Words (livre en anglais) 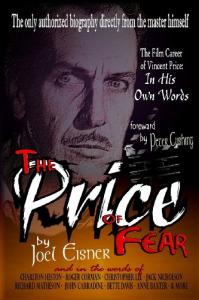 Description de l'ouvrage :
Prior to his death in 1993, Vincent Price was collaborating with Mr. Joel Eisner (author of the over 100,000 copy bestselling Official Batman Batbook concerning the ‘60's Adam West Batman television series) to construct a definitive, official biography of his life and career in films. This is that book. Sanctioned by the Vincent Price Estate and daughter Victoria, THE PRICE OF FEAR is not only told through journalist Eisner's personal interviews with Price himself but with the cooperation, direct interviews and quotes from many of those with whom Price worked with throughout his illustrious career. Before he passed away, all Vincent saw of this book was his fellow actor Peter Cushing's heartfelt foreward. Introducing the true story of a man born within a moderately wealthy family of candy manufacturers in 1911 St. Louis, Missouri, whose interest in theatre during the Great Depression led him into eventually becoming, arguably, the most universally iconic personification of the horror genre in the entire encompassment of the 20st Century. That man was Vincent Leonard Price, Jr. What you now hold in your hands is the only authorized, official biography about Vincent Price's entire life in films ever published in history with his direct participation and approval, in his own words. Never before has the story of Vincent's life been told, how he rose from dramatic theatre and stage to joining the ranks of the early cultured Hollywood elite fresh from where motion pictures were first spawned to eventually spend his life behind horrifying makeup and horror genre movie roles at the sacrifice of a greater passion for fine art and comedy. For nearly a century, we've known the name. We've heard the voice. We've seen the many faces. At last, with The Price of Fear: The Film Career of Vincent Price, in His Own Words, we can know the man, directly from the legend himself, in this never-before-published highly entertaining and inspirational masterpiece.

Biographie de l'auteur :
Joel Eisner is the author of three successful tv pop culture books including the bestselling The Official Batman Batbook (selling over 100,000 copies worldwide). He has co-written Lost in Space Forever and Television Comedy Series: An episode Guide to 153 TV Sitcoms in Syndication. His most recent book is The Official Batman Batbook Revised Bat-Edition a newly updated and enlarged version of the original Batbook which surpasses the original in both scope and content. Upcoming projects include a film and TV trivia book and a pop culture series of books called Attack of the Rubber-Suit Monsters dealing with the hundreds of films and television series featuring actors in rubber monster, gorilla and robot suits. TV Historian Joel Eisner received a B.A. in Media Arts and an MBA in Marketing from Long Island University. He has published numerous interviews and articles in such magazines as Starlog, Starblazer, SFTV, and Collecting Hollywood. He has been quoted and his works have been sited in numerous publications. He lives in New York City with his wife Sharon, his son Jeremy and their dog Sparky. Mr. Eisner is available for inquiries at PRICEOFFEAR@HOTMAIL.COM

A Life in Film

The Lost Years of Bela Lugosi

More Than a Monster

The Life and Films of Bela Lugosi