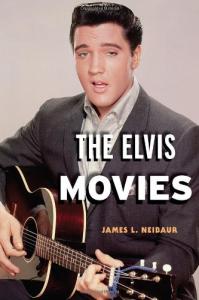 Description de l'ouvrage :
Elvis Presley’s stature as the “King of Rock and Roll” will never be challenged. Between his first RCA hit single in 1956—the number-one smash “Heartbreak Hotel”—and his death in 1977, Elvis amassed more than 100 hits on the music charts. Presley’s dominance on the music chart was paralleled only by the singer’s motion picture career. Between 1956 and 1969, Elvis appeared in more than thirty films, further cementing his place as one of the most popular entertainers of the twentieth century. While there have been countless books that explore the real Elvis tucked beneath layers of showbiz mythology, such volumes often dismiss his motion picture career as insignificant or overlook his onscreen work entirely. In The Elvis Movies, James L. Neibaur looks at the thirty-one features that Presley made, from Love Me Tender in 1956 to Change of Habit in 1969. Most of these were star vehicles tailor-made for his image. As Neibaur points out, Elvis had a real interest in being a good actor, but his initial promise was soon thwarted by anti-creative decisions that sold a packaged version of the singer. Despite lapsing into a predictable formula of lightweight musicals, Elvis Presley’s star power ensured that the films became box office successes. Neibaur examines each film, providing information about their production and offering assessments about their value in general, as well as their place in the Presley canon. Additional details include behind-the-scenes personnel, costars, DVD availability, and featured hit songs. An entertaining and informative look at an often underrated aspect of the singer’s career, The Elvis Movies offers readers insight into his films. This volume will be a welcome resource to fans of the singer who want to know more about the King and his successful ventures on the big screen.

Biographie de l'auteur :
James L. Neibaur is a film historian and educator who has written hundreds of articles, including more than forty essays in the Encyclopedia Britannica. He is the author of several books on film, including The Fall of Buster Keaton (2010), Chaplin at Keystone (2012), The Silent Films of Harry Langdon (2012), and The Charley Chase Talkies (2013), and coauthor with Terri Niemi of Buster Keaton's Silent Shorts: 1920-1923 (2013), all published by Scarecrow Press.

Revue de Presse :
Neibaur reveals a side of Elvis Presley’s career that is often overlooked, and does so in a way that is sure to change the mind of anyone who dismisses it as unimportant in film history. This book, with its numerous interviews, behind-the-scenes info, and Neibaur’s added insight, will both inform and delight both longtime Elvis fans and those who are only just discovering his brilliance. (Examiner.com)
Neibaurs book is well written. . . .[H]e makes the history of Elvis Presley's film career comprehensible. . . .A very readable book, a wonderful addition to the other, is very recent publications on the film career of Elvis Presley. (The Memphis Flash)
Throughout the 1950s and 1960s Elvis Presley starred in over thirty movies with most dismissed as lighthearted vehicles to help sell the accompanying soundtrack albums. . . .However, they were a major part of Elvis' career and have often been overlooked in print with very few books examining his movie career. Fortunately that has now been corrected with the publication of James L. Neibaur’s latest book, The Elvis Movies. Neibaur, a film historian, is well qualified to write such a book as his previous work has included studies of Charlie Chaplin, Buster Keaton and Harry Langdon, among others. In The Elvis Movies he offers in-depth and critical discussions about each movie starting with Love Me Tender in 1956 and ending with Change Of Habit in 1969. . . .Besides the details of each film (producers, directors, actors, actresses, songs, box office gross etc) Neibaur examines the impact the movies had on Elvis’s career and popular culture at the time. By including chapters on The Rise of Elvis Presley, Elvis In The Army, The Comeback Special and The Final Years Neibaur also tracks the evolution of Elvis’s career and personal life. The book is also illustrated with movie stills, posters and trade ads which help illustrate the story. . . .The Elvis Movies reveals an often overlooked aspect of Elvis Presley’s career in a way that should change the mind of those who dismiss it as unimportant in the history of film and is highly recommended. (Peter Lewry - Official Blog)