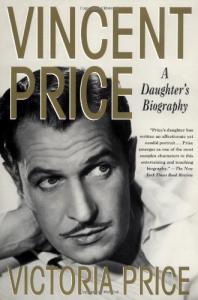 Description de l'ouvrage :
Vincent Price is a true Hollywood legend, whose vast and distinguished career-as the voice of The Saint on the radio, in such unforgettable films as House of Wax and The Fly, and on the Broadway stage-spanned more than a half-century. In addition to being an icon of stage and screen large and small, Price was also an avid art collector, a gourmand, a dashing and relentless charmer, and a loving father. His daughter Victoria was born shortly before Price turned 51, at the height of his popularity. Though the star's busy film schedule took him in and out of his young daughter's life, he was always a larger-than-life presence and, simply, her father. Victoria adored him, and despite his harrowing schedule, their relationship was close. That is, until Price married his third wife, the headstrong and independent actress, Coral Browne. Victoria was a girl of twelve, and her new stepmother resented the strong relationship between father and daughter, and consequently did much to keep the two apart. Late in Price's life, however, he and his daughter were brought together again for some of their most memorable time together. In this elegant biography-cum-memoir, Victoria Price reveals a man both complex and human. An actor of range, he starred in both the film noir milestone Laura and the Biblical classic The Ten Commandments. As a "pre-war anti Nazi sympathizer," he was greylisted during the Red Scare of the 1950s-until, in a desperate gesture, he signed a secret oath that saved his career. And his passion for the arts gave him a second life as an erudite columnist and collector, even as his films graced drive-ins nationwide. Victoria Price's account life of her father is full and candid; both his passionate and charismatic public persona and his conflicted inner life are treated with curiosity and understanding. Vincent Price: A Daughter's Biography is, in short, the thorough-and uniquely intimate-life of a legend.

Description de l'ouvrage :
Those who only think of Vincent Price as the deliciously evil star of numerous horror films are in for an enjoyable surprise with Victoria Price's Vincent Price: A Daughter's Biography. The younger Price, through a dedicated search of clippings, letters, and her father's old journals, paints a beautifully rich portrait of a man with personal grace, intellectual fire, and a kind heart. Price reveals everything from odd little tidbits--Vincent was cast in his first London stage production due to his gum-chewing abilities--to profound depths, such as his lifelong love of art and his serious reputation as a student and collector. Price also had a surprisingly good sense of humor, indulging in genially self-deprecating jokes about his own occasionally abysmal movies.
Though this is definitely a loving memoir of her father, Victoria Price is not blinded by her affection for him. She gives an earnest attempt at presenting the whole man--fact-checking and debunking a few cherished family legends and unflinchingly reporting her father's youthful anti-Semitism. (As Price grew more worldly and met some actual Jews, he reversed his position and became an active supporter of B'nai Brith and the Jewish Anti-Defamation League.) But A Daughter's Autobiography's may best value may be as a handbook for actors: through the numerous ups and downs of his career, Price remained a consummate professional. He never stopped working to improve his skills, deliberately sidestepping romantic-lead parts to take on more challenging roles, and was unfailingly generous to his costars. A truly engrossing look at the noble character of one of the silver screen's greatest villains. --Ali Davis

Revue de Presse :
From Publishers Weekly : A legendary screen villain and host of PBS's Mystery, Vincent Price (1911- 1993) was also a gourmet chef, a bestselling author, an enthusiastic art expert and collector and a general all-around good guy, according to this vivid biography. Written by his daughter Victoria, who writes for television, the book takes us from Price's early acting career, where one of his first jobs was as Helen Hayes's leading man on Broadway, to his days, starting in 1938, under a Hollywood contract, beginning with supporting film roles (Laura; Song of Bernadette). By the 1950s, he had patented his suavely villainous screen persona in The Fly, House of Wax and The Ten Commandments. By the time Victoria was born to Price and his second wife, Mary, in 1962, he was enjoying his greatest success in film, his low-budget but highly profitable collaborations with Roger Corman (The Pit & the Pendulum, Masque of Red Death). Victoria Price explores her father's life as if unraveling a mystery, never ignoring his failings (his secret signing of a loyalty oath during the blacklisting era; an affair that destroyed his 24-year marriage) or secrets (including his possible bisexuality). Definitive, exhaustively researched and superbly written, the book contains none of the sentimentality the subtitle may suggestAin part because of the vast material the author had access to, including over 200 pages of transcribed conversations during her father's final years, two nearly completed memoirs by him, a lifetime of preserved correspondence and the firsthand recollections of dozens of contemporaries. Victoria Price tells Vincent's tale with such clear-eyed pride that the reader cannot help being won over. Photos not seen by PW. (Oct.) Copyright 1999 Reed Business Information, Inc.

The Film Career of Vincent Price, In His Own Words