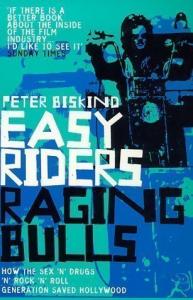 Description de l'ouvrage :
When the low-budget biker movie Easy Rider shocked Hollywood with its success in 1969, a new Hollywood era was born. This was an age when talented young filmmakers such as Scorsese, Coppola, and Spielberg, along with a new breed of actors, including De Niro, Pacino, and Nicholson, became the powerful figures who would make such modern classics as The Godfather, Chinatown, Taxi Driver, and Jaws. Easy Riders, Raging Bulls follows the wild ride that was Hollywood in the '70s -- an unabashed celebration of sex, drugs, and rock 'n' roll (both onscreen and off) and a climate where innovation and experimentation reigned supreme. Based on hundreds of interviews with the directors themselves, producers, stars, agents, writers, studio executives, spouses, and ex-spouses, this is the full, candid story of Hollywood's last golden age.
MARTIN SCORSESE ON DRUGS: "I did a lot of drugs because I wanted to do a lot, I wanted to push all the way to the very very end, and see if I could die."
DENNIS HOPPER ON EASY RIDER: "The cocaine problem in the United States is really because of me. There was no cocaine before Easy Rider on the street. After Easy Rider, it was everywhere."
GEORGE LUCAS ON STAR WARS: "Popcorn pictures have always ruled. Why do people go see them? Why is the public so stupid? That's not my fault."

Quatrième de couverture :
Easy Riders, Raging Bulls vividly chronicles the exuberance and excess of the times: the startling success of Easy Rider and the equally alarming circumstances under which it was made, with drugs, booze, and violent rivalry between costars Dennis Hopper and Peter Fonda dominating the set; how a small production company named BBS became the guiding spirit of the youth rebellion in Hollywood and how, along the way, some of its executives helped smuggle Huey Newton out of the country; how director Hal Ashby was busted for drugs and thrown in jail in Toronto; why Martin Scorsese attended the Academy Awards with an FBI escort when Taxi Driver was nominated; how George Lucas, gripped by anxiety, compulsively cut off his own hair while writing Star Wars; how a modest house on Nicholas Beach occupied by actresses Margot Kidder and Jennifer Salt became the unofficial headquarters for the New Hollywood; how Billy Friedkin tried to humiliate Paramount boss Barry Diller; and how screenwriter/director Paul Schrader played Russian roulette in his hot tub. It was a time when an "anything goes" experimentation prevailed both on the screen and off.