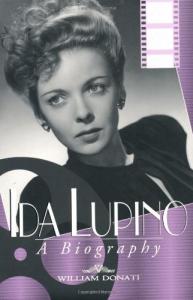 Description de l'ouvrage :
"Ida Lupino (1918-1995) was more than a gorgeous image of film noir in the forties and fifties who starred in classics such as They Drive By Night, High Sierra, and Road House. Lupino also evolved into one of Hollywood's earliest female directors whose work was described by Martin Scorsese as ""resilient, with a remarkable empathy for the fragile and heartbroken."" William Donati chronicles the dramatic life of one of Hollywood's most prolific, substantive, and innovative artists, both behind and in front of the camera."

Revue de Presse :
From Publishers Weekly:
Best known as a femme fatale in films such as They Drive by Night (1940) and Road House (1948), Ida Lupino (1918-1995) was born into a British theatrical family and went to Hollywood at the age of 15. Her first contract was with Paramount Pictures, after which she moved on to Warner Brothers, where she and Bogart made their breakthrough film, High Sierra, in 1941. Thereafter followed a succession of films noirs in which she "portrayed mad and bad dames." Considering herself "a poor man's Bette Davis," Lupino rose above the glamour of the silver screen to become a respected film director. She founded her own company, Filmmakers, which specialized in low-budget films on socially controversial themes. Lupino was married at various times to actor Louis Hayward, studio exec Collier Young and actor Howard Duff, with whom she had a daughter. Donati (coauthor with Buster Wiles of My Days with Errol Flynn) adores his subject but doesn't shrink from showing blemishes, such as the high-strung personality inclined to erratic mood swings. He depicts Lupino as a spirited, multitalented artist who besides her film career wrote many songs and made numerous radio and TV appearances. The appendix includes a detailed filmography. Photos.

Ida Lupino Behind the Camera