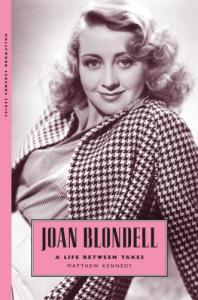 Description de l'ouvrage :
This book about an actress with a long and lustrous career ---Provides the first major biography of this enduring Hollywood star ---Offers extensive research and insights gained from the cooperation of Blondell's friends, family, and colleagues ---Includes over 25 photographs ---Expands the Hollywood Legends Series

Description de l'ouvrage :
Joan Blondell: A Life between Takes is the first major biography of the effervescent, scene-stealing actress (1906-1979) who conquered motion pictures, vaudeville, Broadway, summer stock, television, and radio. Born the child of itinerant vaudevillians, she was on stage by age three. With her casual sex appeal, distinctive cello voice, megawatt smile, luminous saucer eyes, and flawless timing, she came into widespread fame in Warner Bros. musicals and comedies of the 1930s, including Blonde Crazy, Gold Diggers of 1933, and Footlight Parade.
Frequent co-star to James Cagney, Clark Gable, Edward G. Robinson, and Humphrey Bogart, friend to Judy Garland, Barbara Stanwyck, and Bette Davis, and wife of Dick Powell and Mike Todd, Joan Blondell was a true Hollywood insider. By the time of her death, she had made nearly 100 films in a career that spanned over fifty years.
Privately, she was unerringly loving and generous, while her life was touched by financial, medical, and emotional upheavals. Meticulously researched, expertly weaving the public and private, and featuring numerous interviews with family, friends, and colleagues, Joan Blondell: A Life Between Takes traces the changing face of Twentieth Century American entertainment through the career of this extraordinary actress.

Revue de Presse :
"Terrific . . . . Joan Blondell: A Life between Takes [is] one of the best actor bios ever . . . . Kennedy fully achieves the challenging task of making the reader feel as if we know the subject personally. It is a loving and inspiring tribute to a wonderful person and performer." --The National Board of Review "I wouldn't have thought it possible for anyone to produce a genuinely personal book about this popular actress so many years after her death, but Matthew Kennedy has done just that . . . . he has written a warm, appreciative, and amazingly intimate biography . . . . Kennedy is a genuinely good writer who knows the language as well as he does vintage Hollywood movies. This book gets my highest recommendation." --Leonard Maltin's Movie Crazy "dishy and well-researched" --The Village Voice "Kennedy's research, not only of Joan's early career but also her personal life, is second to none . . . it reads like a tale that could transition into a big screen drama . . . . Kennedy takes us through Joan's life like a tour guide. His approach is highly effective, in that he skillfully paves the way for surprises but never sways toward a mechanical commentary. The true sign of a good book is one that appeals to all audiences. There are a great number of fascinating twists between this 300-page biography, which could never be done justice in a regular review." --The Midnight Palace "[Blondell's] life and work finally get their due . . . Kennedy's biography reminds us of Blondell's great success in the film industry and provides fascinating insight into the struggles faced by an actor who is never quite able to reach the top. Recommended for all academic and public libraries." --Library Journal

It Ain't No Sin

A Passionate Life And Career