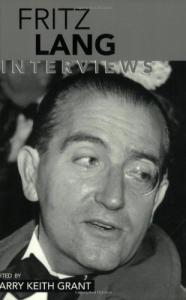 Description de l'ouvrage :
These collected interviews of the German expatriate whose work includes classics of German cinema, American crime films, noir films, and Westerns
---show Lang to be one of the film greats of German Expressionism, with such silent-film classics as Metropolis (1927) and M (1931).
---include several interviews translated from German and published in English for the first time.
---demonstrate how Lang, in Hollywood, worked with every major studio except Disney, directing films that range from blockbusters (The Big Heat with Lee Marvin and Gloria Grahame) to modest B movies. His films depict an entrapping, claustrophobic world in which people are controlled by larger forces and struggle vainly against fate and against personal doom
---show him to be a notoriously difficult to interview, evasive, prevaricating, sometimes caustic, autocratic
---range over a period of forty years

Description de l'ouvrage :
The films of Fritz Lang depict an entrapping, claustrophobic world in which people are controlled by larger forces. His overriding theme is the struggle against fate and against the traits of human nature that doom us.
His life and work spanned six decades of film history-from the silent era through the golden age of German Expressionism of the 1920s and the classic studio system in Hollywood to the rise of the international co-production. In Hollywood he worked for every major studio except Disney. He made blockbusters, modest B movies, and everything in between. Among his films are classics of German cinema-including Metropolis and M. In America he made some of the most notable crime movies (Fury), noir films (The Big Heat), and Westerns (The Return of Frank James) of the studio era. Despite the different time periods, nations, and genres in which he worked, his films remain stylistically consistent.
Lang (1890-1976), a notoriously difficult interviewee, granted relatively few interviews apart from short publicity exchanges in the promotion of his films. Fully aware of his public persona, he was a canny self-promoter who carefully constructed half-truths and myths about himself.
This fascinating collection covers his conversations about his life and his works over a period of forty years. They reveal how cinema for Lang was an intensely personal art. "For me," he said, "cinema is a vice. I love it intimately. I've often written that it is the art form of our century."

Revue de Presse :
Lang is best known for the silent German films, especially Metropolis, that he directed between the world wars, and the genre movies, including such noir classics as The Big Heat, that he made after emigrating to America. All but one interview in this book come from Lang's last two decades, when, no longer an active filmmaker, he was a cinematic legend worshiped by the French New Wave directors (Godard had him play himself in Contempt ). His reputation for manipulating his image is apparent in the anecdotes he repeatedly trots out, such as his claim to have fled Germany the very day that Goebbels asked him to be the filmmaker for the Third Reich (a story debunked in later biographies). Much of Lang's spiel is factually unreliable, yet all remains fascinating. A notoriously difficult interview subject, Lang cannily exploited his Teutonic image by bullying the young film critics who idolized him. These conversations often fascinate by showing the temperamental filmmaker avoiding cinematic theorizing, making absurd pronouncements, and flirting shamelessly with female interviewers. Gordon Flagg Copyright © American Library Association. All rights reserved

Invasion of the Body Snatchers (2010)