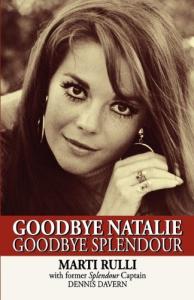 Description de l'ouvrage :
Natalie Wood was a Hollywood icon, beloved by millions for her performances in such classics as Miracle on 34th Street, West Side Story and Rebel Without a Cause. Married for the second time to actor Robert Wagner and the mother of young children, Natalie had everything to live for. Her bizarre death on or near the yacht Splendour on a chilly November evening in 1981 has been shrouded in mystery. In his recent best-selling memoir Pieces of My Heart, Robert Wagner told his version of what happened on the yacht Splendour on the night his wife died. But is Wagner's version accurate? Who knows the truth? Goodbye Natalie, Goodbye Splendour is the result of a decades-long investigation by journalist Marti Rulli and Dennis Davern, Natalie's friend, confidant, and captain of the Splendour on that controversial night. Painstakingly researched and written from the heart, here is an in-depth examination of Natalie Wood's life -- and death.

Biographie de l'auteur :
Marti Rulli has held executive positions in printing and media. She runs her own advertising business and is a long-time freelance writer. Dennis Davern was the boat captain for Robert Wagner and Natalie Wood and was on the yacht Splendour on the night of Wood's death. He currently owns and operates a marina and boat maintenance business.

The Life of Natalie Wood

The Biography of Natalie Wood