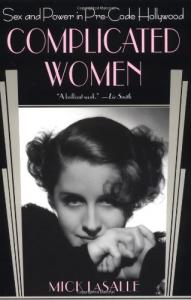 Description de l'ouvrage :
In the pre-Code Hollywood era, between 1929 and 1934, women in American cinema took lovers, had babies out of wedlock, got rid of cheating husbands, enjoyed their sexuality, led unapologetic careers, and, in general, acted the way many think women only acted after 1968.

Before then, women on screen had come in two varieties-sweet ingenue or vamp. Then two stars came along: Greta Garbo, who turned the femme fatale into a woman whose capacity for love and sacrifice made all other human emotions seem pale; and Norma Shearer, who succeeded in taking the ingenue to a place she'd never been: the bedroom. In their wake came a deluge of other complicated women-Marlene Dietrich, Jean Harlow, and Mae West, to name a few. Then, in July 1934, the draconian Production Code became the law in Hollywood and these modern women of the screen were banished, not to be seen again until the code was repealed three decades later.

A thorough survey and a tribute to these films, Complicated Women reveals how this was the true Golden Age of women's films.

Pre-Code Hollywood and the Birth of the Modern Man