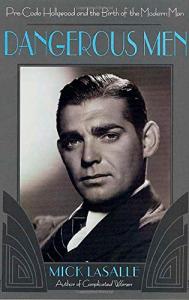 Description de l'ouvrage :
Using the same mix of accessibility and insider knowledge he used so successfully in Complicated Women, author and film critic Mick LaSalle now turns his attention to the men of the pre-Code Hollywood era.

The five years between 1929 and mid-1934 was a period of loosened censorship that finally ended with the imposition of a harsh Production Code that would, for the next thirty-four years, censor much of the life and honesty out of American movies. Dangerous Men takes a close look at the images of manhood during this pre-Code era, which coincided with an interesting time for men-the culmination of a generation-long transformation in the masculine ideal. By the late twenties, the tumult of a new century had made the nineteenth century's notion of the ideal man seem like a repressed stuffed shirt, a deluded optimist. The smiling, confident hero of just a few years before fell out of favor, and the new heroes who emerged were gangsters, opportunists, sleazy businessmen, shifty lawyers, shell-shocked soldiers-men whose existence threatened the status quo.

In this book, LaSalle highlights such household names as James Cagney, Clark Gable, Edward G. Robinson, Maurice Chevalier, Spencer Tracy, and Gary Cooper, along with lesser-known ones such as Richard Barthelmess, Lee Tracy, Robert Montgomery, and the magnificent Warren William. Together they represent a vision of manhood more exuberant and contentious-and more humane-than anything that has followed on the American screen.

Sex and Power in Pre-Code Hollywood