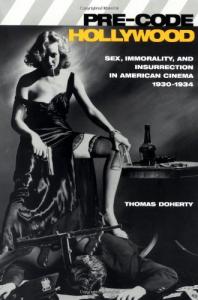 Description de l'ouvrage :
Pre-Code Hollywood explores the fascinating period in American motion picture history from 1930 to 1934 when the commandments of the Production Code Administration were violated with impunity in a series of wildly unconventional films -- a time when censorship was lax and Hollywood made the most of it. Though more unbridled, salacious, subversive, and just plain bizarre than what came afterwards, the films of the period do indeed have the look of Hollywood cinema -- but the moral terrain is so off-kilter that they seem imported from a parallel universe.

In a sense, Doherty avers, the films of pre-Code Hollywood are from another universe. They lay bare what Hollywood under the Production Code attempted to cover up and push offscreen: sexual liaisons unsanctified by the laws of God or man, marriage ridiculed and redefined, ethnic lines crossed and racial barriers ignored, economic injustice exposed and political corruption assumed, vice unpunished and virtue unrewarded -- in sum, pretty much the raw stuff of American culture, unvarnished and unveiled.

No other book has yet sought to interpret the films and film-related meanings of the pre-Code era -- what defined the period, why it ended, and what its relationship was to the country as a whole during the darkest years of the Great Depression... and afterward.

Description de l'ouvrage :
Who says the world of classic Hollywood moviemaking was never risqué? We tend to think of black-and-white movies as representing a sanitized world, where crime never paid, ladies of the evening had hearts of gold, and married couples slept in separate beds. But in fact, censorship in American cinema didn't begin in earnest until 1934, when Will Hays and Joseph Breen began enforcing the legendary Hollywood production code. In this revelatory book, Thomas Doherty looks at sound movies of 1930-34--what is now known as the "pre-code" era.
This was a Hollywood of loose dames, hot whoopee, and coked-up killers who'd do anything for a pot of jack. It was a world that was often amoral and anarchic--an industry that allowed James Cagney and Paul Muni wild orgies of violence, openly flaunted the sexuality of Marlene Dietrich and Mae West, gave King Kong permission to crush cars and eat people, and allowed Tod Browning to make Freaks, one of the ghastliest, most sensationalistic, and greatest American movies.
Doherty's book captures this mad universe beautifully, describing films in such delightful detail that you may find yourself tossing it on your couch and racing to the video store. He also documents the downfall of the period, the outrage that was leveled against early sound films, and the emerging code that repressed American movies for almost 30 years. Film fans reveling in the debauchery of Hollywood's naughtiest era will also want to see Mark A. Vieira's Sin in Soft Focus. --Raphael Shargel

Revue de Presse :
From Publishers Weekly : In early 1930s America, weighed down by the Depression, a vice-ridden, wise-cracking, anarchic antiauthoritarianism ruled Hollywood. Doherty's exhaustive cultural history of the films produced in the last years before the enactment of the Motion Picture Production Code reveals how the ascendancy of sound and a plummeting economy led to four years of wildly edgy films (1930-1934), radically different from the spic-and-span products of classic Hollywood. Most of the films chronicled hereAsporting titles like Eight Girls in a Boat, Call Her Savage and Merrily We Go to HellAhave been both forgotten by film historians and unavailable to generations of late-night TV viewers. Doherty begins with the misery and discontent gripping the U.S. in the 1930s, explaining how these forces shaped a motion picture industry just learning how to use the power of sound. He organizes the later chapters around a colorful, trashy array of genres: anarchic comedies; horror, gangster and vice films; over-the-top newsreels; and expeditionary films set in dangerous territory. Doherty's plot summaries at times grow tiresome, but he rarely fails to enliven them with gossip, quips or anecdotes. Ultimately , he shows how the fun came to a crashing halt when the National Legion of Decency and the Production Code Administration, spearheaded by Joseph Breen, launched a massive and astonishingly successful crusade to clean up "the pest hole that infects the entire country with its obscene and lascivious moving pictures." Given the politics swirling around Hollywood's edgier fare in the wake of the shootings in Littleton, Colo., this lurid and all too short-lived chapter of Hollywood history has never seemed more germane. (Sept.) FYI: A series at New York's Film Forum, The Joy of Pre-Code, running from August 20 to September 14, 1999, will feature more than 40 precode films, including many discussed by Doherty. Copyright 1999 Reed Business Information, Inc.

Pre-Code Hollywood and the Birth of the Modern Man

Sex and Power in Pre-Code Hollywood