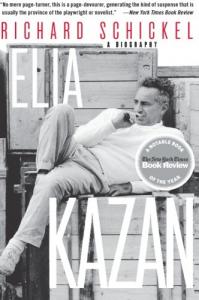 Description de l'ouvrage :
From the late forties through the sixties, Elia Kazan was the most important and influential director in America, and the only one who managed simultaneously to dominate both theater and film. In that role he manifestly shaped the conception and writing, as well as the presentation, of many of the period's iconic works, reshaping the values of the stage and bringing a new realism and intensity of performance to the screen. His various achievements include the original Broadway productions of The Skin of Our Teeth, All My Sons, and Death of a Salesman and such Hollywood films as Gentleman's Agreement, Brando's Streetcar, and Splendor in the Grass.

A non–traditional biography, this book combines social and political history with a sharp critical evaluation of Kazan's work. Schickel presents Kazan as a figure of his culture and time, much in the same way that David Remnick treated Muhammed Ali and the larger picture of American history in King of the World. History's view of Kazan is now colored by a single political act –– his naming names in testimony before the House Un–American Activities Committee. By putting the actions, work, and words of this towering figure in context, Schickel not only defends his hero and his hero's work; he also helps the reader move beyond Kazan's most infamous moment to appreciate the larger American story in which he played such a pivotal role. The result is an intelligent and lively biography and social history.

Revue de Presse :
“Breathtaking, often riotous but never excessive...[Elia Kazan] could not be a more pertinent study of a spellbinding subject.” (New York Times Book Review) “A scintillating and thoroughly readable new biography.” (Atlanta Journal-Constitution) “This sympathetic, scrupulously researched biography...vividly conveys the director's potent personality...” (Booklist (starred review)) “[A] masterly meditation on a complex, conflicted, and underappreciated director. . . . One of the year's best biographies.” (Library Journal) “Schickel has a razor-sharp understanding of the many ways in which his subject's life and work affected one another.” (Martin Scorsese) “A worthy companion to the director's own autobiography...immensely likeable.” (The Economist) “A splendid, subtle, literate biography of one of the grand creative artists of theater and film in our time.” (Arthur Schlesinger, Jr.) “This analysis is unsparingly thorough...Schickel's forceful, personalized criticism becomes as attention grabbing as Kazan's body of work.” (Publishers Weekly) “Richard Schickel has produced the first 'life' of Kazan...[with] an impressive knowledge of the terrain [and] soundly balanced judgments.” (Los Angeles Times Book Review) “...contains not a single dull moment for those interested in the behind-the-scenes aspects of theater and movies...” (New York Press) “Outstanding....Perhaps, thanks to Schickel's biography, history will once again remember Kazan primarily for his accomplishments, not his testimony.” (Grand Rapids Press) “One of those exhilarating publishing rarities -- the ideal writer for the ideal subject.” (Buffalo News) “Theater and film buffs -- not to mention scholars -- will revel in this astute explication of a working life.” (New York Sun)

Biographie de l'auteur :
Richard Schickel has written many books about film, including The Disney Version, Brando: A Life in Our Times, and Clint Eastwood: A Biography. He is a film critic for Time magazine and the producer-writer-director of more than thirty documentary films about figures such as Charlie Chaplin, Woody Allen, Martin Scorsese, and Elia Kazan.

A Celebration of the Life And Films of Humphrey Bogart